One of Australia’s first mobile abattoirs built in WA

A WA-based engineering company has built one of the first mobile abattoirs for processing premium meat, addressing farmer and animal welfare concerns by eliminating the need to transport animals. 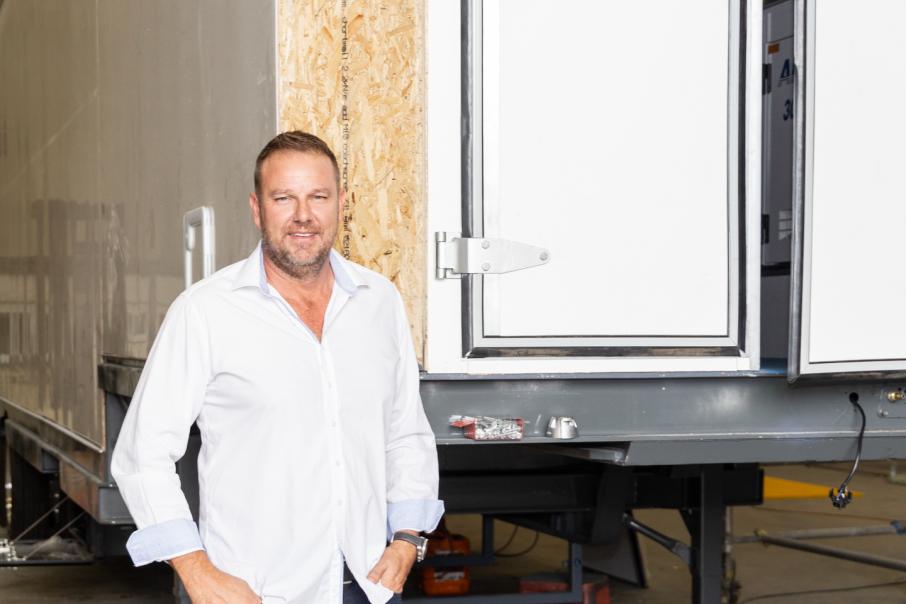 Mr Simmons says it was a challenge to build and make every component of the abattoir. Photo: Gabriel Oliveira

A WA-based engineering company has built one of the first mobile abattoirs for processing premium meat, addressing farmer and animal welfare concerns by eliminating the need to transport animals.

Provenir was awarded a Cooperative Research Centre grant to develop its concept, which won the Judges' and People's Choice Award at accelerator ag-tech program SproutX in 2017, and contracted Simmons Global to design the project to bring its idea into fruition.

The facility is mounted on a truck trailer and animals are processed in the same way as a normal abattoir, except for the deboning, which occurs at a separate location.

Simmons Global chief executive Dave Simmons said a mobile abattoir was advantageous to the farmer because it allowed them to trace their meat.

He said farmers who processed animals in static abattoirs did not necessarily get their own product back so having their animals processed on their own farm meant they knew the meat was theirs.

“They know it’s their particular product and they know they have put the care and nurture into that product,” Mr Simmons said.

There was also a financial benefit to farmers because they don’t have to send cattle on trucks or pay for feed lotting, and when it came time to sell the farmer could ask for a premium price as they knew it was their premium product, Mr Simmons told Business News.

He said the abattoir addressed some of the animal welfare concerns the public had about farming.

“Animal stress is considerable when you go away from their normal home environment so as soon as they go into a truck they have a whole heap of changes where they dehydrate, they stress and that all accumulates into affecting the meat quality,” he said.

“The duration of stress once the process of ‘abattoiring’ commences, it minimises that to the shortest most humane way possible.”

He said although the mobile abattoir processed premium, high-quality meat, there was a wide application for it around the country.

“They say there is going to be about five or 10 of these units running around servicing, one of those was slated to be in South West WA,” he said.

Provenir is planning to purchase livestock on the property from the farmer, process the meat in the mobile abattoir, transport it to a butchery and then distribute the meat.

Provenir chief executive and co-founder Chris Balazs said as a farmer himself, he hated loading livestock into the back of his truck and knew there had to be a better way.

“Mobile processing makes so much sense, for farmers, for livestock and for consumers,” Mr Balazs said.

“It’s the way of the future for red meat in Australia.

“We understand that for today’s consumer, knowing the provenance of their food, how it was produced, and whether it meets their personal values, is imperative to their purchasing decision.

“The company’s technology will eliminate live transport prior to processing and the associated stress on the animal, which will result in meat of exceptional quality, taste and tenderness.”

As it was among the first mobile abattoirs to be built in Australia, Mr Simmons said it was a challenge to build and make every component.

“The biggest challenge was that everything has been invented specifically for this job so where you would normally go and buy a simple product we have had to engineer that,” he said.

Mr Simmons said the company had the option to build the mobile abattoir anywhere in Australia but as WA was involved in mining, the state had leading-edge suppliers.

“They are all able to think outside the box and that’s really important when you are doing something like this because a lot of companies who don’t have that flexibility or that sort of ability to think laterally, they just (say) ‘we don’t make that sorry’,” he said.