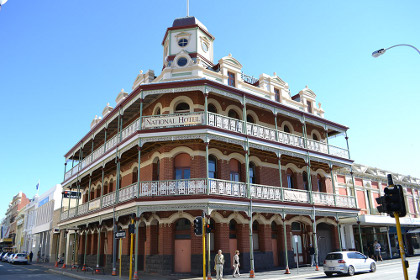 Fremantle’s National Hotel has been sold for an undisclosed sum, with the historic building set to be converted into a Carnegie’s Bar and Restaurant and boutique hotel with a rooftop bar and café.

The Hong Kong-based Carnegie’s Group announced today it had purchased the hotel, and its ground floor would become Carnegie’s Fremantle.

The upper floors will be occupied by a four-star boutique hotel, while the rooftop will become home to Widow’s Walk Bar and Café.

The National Hotel has been vacant since 2007, when it was almost destroyed by a fire.

“Carnegie’s has operated in Asia for nearly 2 decades and been a popular Perth city destination for the last 10 years or so,” the group said on its new National Hotel website.

“The Fremantle venue will be a significant addition to the group and a new meeting spot for the people of Fremantle.

“We will be creating a design sympathetic to the wonderful heritage of the building, retaining the imposing ceiling heights, pressed tin ceilings and stained glass windows.

Construction will commence next month.