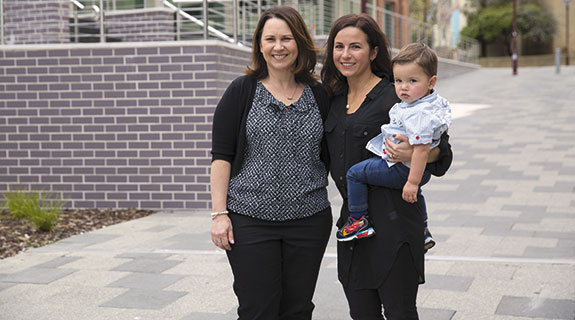 Ms Munro was third in the retail category, too, for her business, which is designed to make it easier for parents to feed kids with allergies.

She runs an online store amalgamating several suppliers that allows consumers to search food by allergy.

She said the idea for the business came to her when she realised too few women were taking appropriate action to protect their skin from the dangers of Australia’s harsh sunlight.

“We felt there was a bit of a (space) in the market for something that bridges the gap between fashion and functional sun protection,” Ms Bryden said.

“Our goal, firstly, is to get women talking about sun protection and then get them actually carrying through with it by giving them that stylish option.”

Sunbella now exports to the US, UK and Canada, with the state of California its key overseas market.

The parasols are produced in China, with Ms Bryden saying there was only one umbrella manufacturer in Australia.

However, outsourcing production does not reduce quality, Ms Bryden was quick to point out; her parasols were suitable for use as corporate gifts for women.

Both women said raising children while running a business was a tough, yet extremely rewarding challenge.

Ms Munro, who self-funded her business, said she loved the opportunity to work while also raising a child.

“It is busy, but I like it because it gives me the flexibility to be there when the kids need me,” she said.

“I can work in my own time … in hours that suit me.

“That means when the kids are at school, in bed or on weekends.

“But it is hard to balance it,” Ms Munro told Business News.

Ms Munro said she had learned a lot through the experience, particularly through the Entourage mentoring program, which held a convention in Perth earlier this month.

Ms Bryden, who formerly managed campaigns at Tourism WA, said running a business was definitely challenging, but the rewards outweighed the difficulties.

“The other option is to go back and work full time, and not have that flexibility and not get to make those calls,” she said.

Another WA winner in the awards was Lisa Fitzpatrick, who came third in the services award for Sacred Women’s Business, which helps women succeed in business.

Ms Davidson said she was passionate about kids’ health, and her range of homemade organic and healthy foods was becoming increasingly popular.

Sales by her self-funded business had grown by about 50 per cent in July and August, she said.

In the longer term, Ms Davidson told Business News she would target national growth, and would then focus on securing a toehold in South-East Asia.

She said her son had provided the inspiration for her business, with a large number of young kids overweight and obese in this generation.

“Something’s got to be done and I really want to be part of that change,” Ms Davidson said.