The head of the architecture firm responsible for reshaping Perth is preparing for some big changes in the industry. 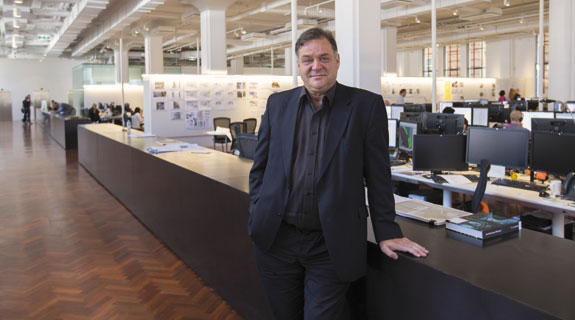 LEADER: Peter Lee has been involved with some of Perth’s biggest projects. Photo: Attila Csasar.

The head of the architecture firm responsible for reshaping Perth is preparing for some big changes in the industry.

Disruptive technology has been a game changer for many industries, from media to transport, to hotels and real estate, and now it is coming to architecture.

At least that’s the confident view of HASSELL director Peter Lee, who says he’s been lucky to be involved in a number of transformative projects across Perth, including Brookfield Place, 140William, Fiona Stanley Hospital and the upcoming Perth Stadium – a collaboration between Hassell, Cox Architecture and HKS.

Mr Lee, who this week won one of the state's most prestigious prizes from the Architect's Board of Western Australia for his outstanding contributions to the industry, told Business News that being part of the firm responsible for those jobs had been “spectacular”.

However, Mr Lee said he recently shifted his focus from future projects to the future of architecture, following a trip to Harvard Business School in the US.

“The biggest discussions there were about disruption, so I’m leading the charge to be ready for when that comes,” Mr Lee said.

Disruption in architecture means automation, Mr Lee said, with global technology giant Google championing the idea of buildings designed by computers, without the need for architects, with its Flux project.

“The world needs to build 4,000 apartments an hour to keep up with population growth, and if you look at China and what’s being built there, automating it may improve apartment design,” he said.

To get around the challenge of being replaced by a machine, Mr Lee said Hassell would concentrate on what he called creative projects – museums, hospitals, railway stations and workplace precincts – buildings that required a human touch.

He said the biggest shift in the past two decades in architecture was the concept of urban design being about place.

Hassell has been lauded for its commitment to placemaking, including a national Planning Institute of Australia prize for Brookfield Place and an Institute of Architects award for 140William.

At the upcoming Perth Stadium build, Hassell’s focus has not just been on the venue itself, but also the surrounding precinct.

“The precinct we’ve planned around the stadium is about mending and healing the land and indigenous stories and activation strategies,” Mr Lee said.

“That side of things where you are creating things that work really well together can’t be automated.”

Those placemaking principles will be applied at a number of other new precincts in Perth where Hassell is involved, namely BGC Development’s Westin Hotel project at 480 Hay Street, Lendlease’s Waterbank in East Perth, and Golden Group’s redevelopment of Belmont Park racecourse.

Mr Lee said the appeal of those projects was their close proximity, giving the architecture firm the opportunity to link them, while maintaining distinctly different personalities.

“All of a sudden you have a number of those places which are like pearls on a necklace, where you are three or four minutes from something interesting,” he said.

“The stadium precinct will be spectacular, Belmont Park, that’s on beautiful land on the edge of the river, and all of that works together to really intensify that end of town.

“With all that happening, Waterbank really has a chance of being something special.

“One of the thing that separates us is we believe through the skill base we’ve got and the experience of different disciplines is that we can unlock the social, cultural and economic value of places, and I think we’ve got a great record of doing that.”

“Every building has the chance of improving the human condition; there is always something you can do on a really high level that will improve the condition for the people there,” he said.

“Buildings should be beautiful; it doesn’t actually necessarily cost any more to make something beautiful.

“But there are a lot of buildings which look wonderful in magazines but are terrible for the streetscape when you go there.

“You need to understand how it fits.”