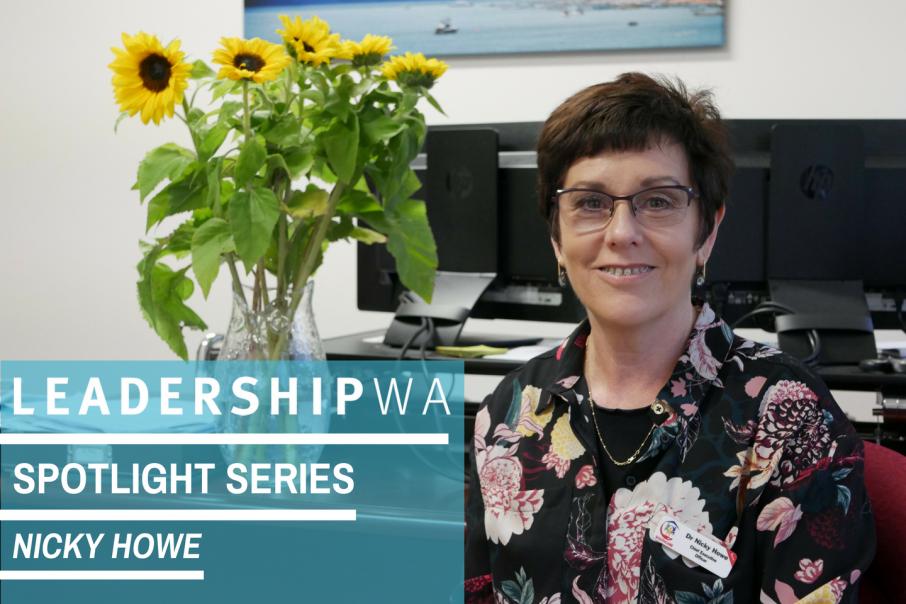 Dr Nicky Howe is the CEO of Southcare, an aged care and community services based not-for-profit. She is also a leadership and management coach and is involved in numerous other non-profits as a board member. She is an Alumnus of Leadership WA’s 2016 Signature Program.

Dr Nicky Howe’s leadership style is like the organisation she runs – she’s all about building up people from the ground up. And like the people who work in her team, the community members that Southcare serves are diverse.

“Southcare is a community-based organisation that is really about addressing the needs of people, and those needs can be quite diverse. The biggest need that we address is really supporting seniors to stay in their own home in their own community. Basically, community aged care. How do we help Mrs Jones stay in her own home? That can be a range of things, right from starting with her doing her garden, and maybe just helping doing a little a bit of cleaning, right through to being at the dying stage and we're offering nursing services which may include palliative care.”

Given Southcare is an eclectic community organisation, it’s important for Nicky to keep a business-focus on what the organisation is doing.

“I hold a view that at the end of the day, I am a business woman, and I'm running a business. We do have a clear mission, and that mission would be different to somebody that's running a for-profit business, but the numbers do have to add up. If the numbers don't add up, then you've got to do something about it.”

One such example of a project that had to be closed was a low-cost food shop.

“We were doing emergency relief, people were giving food. But it wasn’t ideal just giving people food. We wanted to give dignity and respect and let people choose the food they wanted to eat. So we started a little shop. We started in about 1983, and we closed the shop in 2017.

“We closed the shop because it was no longer relevant, and you do have to do that. Sometimes it's not easy, because there's a whole load of emotion caught up with that, but you do have to stand back and say, are we actually getting the outcomes? Is that the best use of that money?”

“The reality was no, because Coles, Woollies and Aldi can do it so much cheaper. Southcare is here to address emerging needs. When that no longer is needed, we step away and do something else.”

A vital part of leading a non-profit is understanding exactly the opportunities and limitations of the sector.

“There are fewer resources in the not-for-profit sector, so you've got to be a lot savvier. When I say resources, I don't just mean  buildings and infrastructure. The reality is we don't pay the salaries that get paid in the private and the public sector.”

But while non-profits don’t have the resources of most for-profits, they do have one invaluable resource: volunteers. When Nicky made the decision to close the low-cost food shop, she was careful to make sure that the volunteers were kept on.

“Those volunteers are still with us. We've just put them somewhere else in the organisation that played to their strengths.”

“Some of our volunteers are themselves struggling, and this is their work. We get people from Centrelink who are in receipt of Centrelink payments, and that means they've got to do 15 hours of service a week. We are their community, we are supporting them, we are helping them with their self-esteem. We're giving them a reason to turn up every day.”

This commitment to community isn’t just lip service. The Southcare offices aren’t in a CBD high-rise; they’re nestled in the community, amongst the people they serve and work with.

Building up people, and being consultative, is key to Nicky’s leadership style.

“My leadership style is very much about using a coaching and mentoring approach. If one of my team wants to be a CEO, how do I get them to be the CEO? I'm always thinking about how I can develop someone, care for them, and support them.”

“I'm also pretty direct. If things are not going well, I'm going to respectfully tell people. I like to keep inspiring people to be better, have better behaviours, and strive for better action. That is why I will give feedback where I say, ‘Look I think you might have let yourself down a bit there.’ Or, ‘Is that the best? You know, could we just arc it up a bit?’”

“You want to create a situation where they know they didn't do their best work, and what they can do to step it up. What support do they need? Who do they need to go and talk to? Have they got a mentor? What training do they need to do? How can I help them? How can I be of service? What am I not doing?”

“As a leader you do have to be able to communicate. You've got to be able to stand up in a room and connect with people and get across a message.”

Ever looking to hone her skills, Nicky has been working on her communication skills by teaming up with a storytelling business coach. She also believes in the importance of a leader maintaining equilibrium in the organisation.

Does this mean that you can’t show vulnerability to your staff?

“I think that you do have to show your vulnerability at times.”

“I was running the session because of my nursing background. I told them a true story about a patient I'd had. As I was telling the story, and I didn't expect this to happen, I got very emotional. But I wasn't going to hide the fact that that emotion came up.”

“That is opposed to another situation last year when we were trying to get a development application through. We all expected to get it approved, and we didn't. I was devastated, and I had to go back and tell everybody that we didn't get planning approval. I thought ‘I'm not going to go back now in this state’. So, I rang the Chairman for a coffee and talked it through. When I got back to the office, I maintained that equilibrium.”

“We are emotional beings, there's no doubt about that, and I think for us to not show our emotion is false. There is a balance between keeping equilibrium and showing our emotions. As a leader, you don't want to have moods that are up and down. That causes staff to feel uncertain. Then they don't trust you.”

“As a leader you are a representation of the mission, the vision, the values. If you don't demonstrate those values, your staff are onto you.”

The development of Nicky’s leadership style began on day one of her career as a nurse.

“I left school at 16, thinking I was dumb, not sure of where I was going. My mum encouraged me to apply to nursing, which you didn't need year 12 for.”

“It was a good decision at that point in time, but I realised quite early on how I was very limited by the fact that I had not finished school and I hadn't gone to university.”

But this limited position was vital for Nicky’s development as a leader.

“I learned an awful lot about hierarchy and how it is very debilitating if you are the person that is down at the bottom, and how it stops people from contributing.”

“That’s always informed my thinking: you need to make sure that everyone in the organisation can contribute no matter where they're at.”

One of Nicky’s most significant achievements as a leader is the establishment of the Engaging Young Leaders on Aged Care and Community Boards Governance Program. This program aims to place young professionals on Boards, an arena traditionally populated by older generations.

The continuation of the program means confronting numerous challenges.

“I've got to raise that money every year if we want to keep running the program. The other challenge is ageism. From my perspective in an aged care not-for-profit, I can see society is quite negative about seniors. But now I'm trying to get young professionals onto boards in aged care and people are going, ‘Oh no, you can't put a young person on a board, they've got no experience.’”

“It's a mindset. People can be stuck in a particular way of thinking, and the challenge as a leader is to try to get them to see it from another perspective. You're trying to flip their thinking.”

Nicky is an Alumnus of Leadership WA’s 2016 Signature Program. When she applied she was already a CEO, but still felt she had more to learn.

“When I said to people I was doing Leadership WA, I know a few people sort of looked at me like, well why are you doing that? I said because I wanted to learn, I wanted to get better. I always want to improve.”

“I didn't go into the Program thinking I knew everything about leadership, because I don't think that at all. People that I knew that had done it were really positive about it. For many people, they found it quite life changing.”

Nicky had been at Southcare for five years when she did the program, and she questioned whether it was time for her to move on to another role.

“Leadership WA gave me the reflective space to ask if I was in the right place? Were my values aligned? Am I doing the work that I love doing? Am I playing my best game?

“I was on the bus one time and I was looking out of the window and it was like yeah, I'm where I want to be. I've still got a lot more to offer, I think there's a lot more challenges for me. It was good for me to come back and say to my chairman, "Well, thanks, I think I'm in the right place."

As a final question we asked Nicky what she would change about leadership in our state if she could wave a magic wand.

“I’d go right down to the basics. People want a job and they want a house, and they want community. If we think about Maslow's hierarchy of needs, they’re basic things. I don't understand why we have so much homelessness in Australia. I don't care what anybody says, there is no need for homelessness. There is enough work for everybody, and there really is enough money for everybody. So, I think we don't pull the right levers. I don't see us really going to the core of solving those problems.”

“If I had a magic wand, I'd be changing mindsets, that's what I'd be doing, because if I could change people's mindsets about how they see the world, we could see the world and actually do things very, very differently. That's what you'd do. You look around the world, and you look at different communities and societies, and you think, well they're solving that problem. How come we don't? Oh, because we don't think that way.“