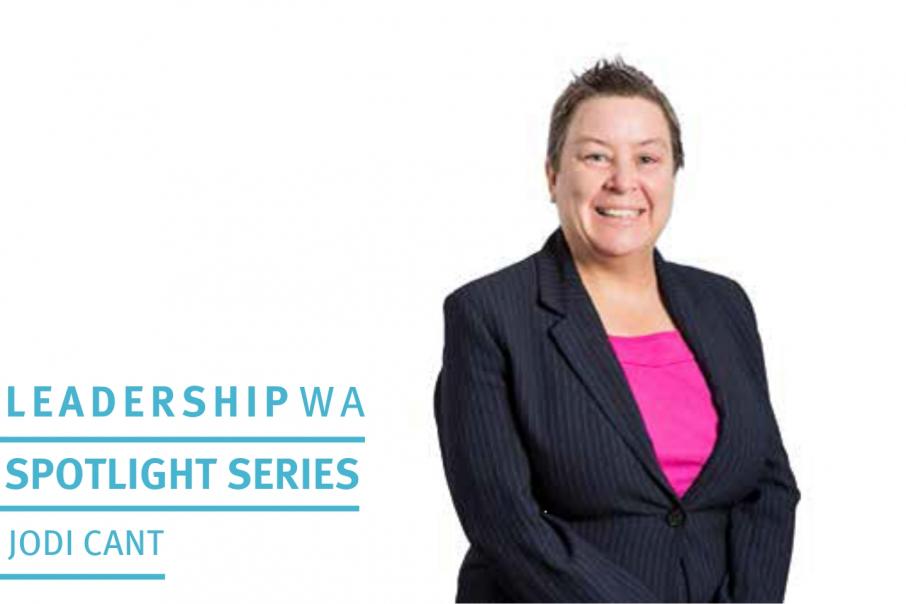 Jodi Cant is the Director General of the Department of Finance. Previously, she was the Chief Executive of Landgate, WA’s land information authority. Her work in creating and driving Landgate’s innovation program has received national and international recognition. In 2016 Landgate became the only State Government agency to ever be named in the Australian Financial Review’s Top 40 Most Innovative Companies list; by 2018 Landgate was named Australia’s most innovative government agency – local, state or federal – and the country’s 19th most innovative company overall. In 2017 Princeton University published a case study on Landgate as one of the world’s leading land registries, inviting Jodi to present at a forum in Washington DC to share the Landgate story.  Jodi graduated from Leadership WA’s Signature Leadership Program in 2007.

We asked Jodi to describe her leadership style.

“That’s for others to judge, but I would like to think people would say I’m firm but fair, open to ideas and opportunities, and that I’m consistent and courageous.  I would say I’m an authentic leader: what you get is the real me.  I’ll put my hand up for any challenge.”

Jodi’s current role sees her at the heart of the State Government’s push to drive reform across the public sector through the Department of Finance, a central government agency that helps set the tone and agenda for the broader sector.

Jodi’s leadership journey is not your standard public sector ‘mail room clerk to corner office’ story; in fact, Jodi doesn’t have an office, and isn’t a big fan of them.

“At Finance we’ve embraced activity-based working.  We’re about getting the job done – being flexible, efficient, open.  Activity-based working suits that, and suits my style – so I was thrilled to come into such an open, collaborative environment when I started in this role last August.”

Jodi’s first ‘office’ was behind the reception desk of the Barking Gecko Theatre Company, Perth’s renowned theatre for young people.

“The theatre’s a fantastic place to hone your leadership skills – operating on a limited budget, cooperating with a team, driving a compelling narrative and gaining immediate audience feedback. It’s a brilliant grounding for any leader.”

From the reception desk, Jodi put up her hand to take on the Marketing Manager role for the company.

“I didn’t have any formal qualification – I’m an economist – bit I figured ‘How hard can it be?’” she said.  “Besides, it sounded like fun.”

From Barking Gecko, Jodi crossed over to the public sector, taking on the challenge of managing communications and marketing for the Department of Housing and Works, before accepting a role at Landgate to run its communications team.

Putting her hand up and taking the lead has been a constant for Jodi throughout her career.  It’s what led her to develop Landgate’s innovation program - the first for a government agency in Australia.

“It felt like the right thing to do at the time.  It turned out I had the right mix of creativity, communication and commerce to make a success of it.”

“The organisation was very hierarchical at the time and many staff weren’t used to having to make changes let alone being encouraged to think differently and change on a regular basis as part of an innovation program.  But what we did have was a courageous and authentic leader – Grahame Searle.

“I had, and still do have, a lot of tenacity. I walked into Grahame’s office and talked for some length about my ideas and the benefits of an innovation program. Once I had finished, Grahame’s only comment was: 'I’ve got your back.' That was all I needed,” Jodi said.

The first element of her research confirmed that the introduction of an open forum that all staff members could use to float ideas was of paramount importance. Here, too, Jodi encountered resistance.

“Our IT department said the online forum wasn’t possible,” Jodi said.  “I suspected that wasn’t the case, so kept asking until I found someone who told me Landgate already owned free software that was perfect for the forum.  I guess persistence is another personality trait.”

But the challenges kept coming.  Landgate’s Corporate Executive team at the time insisted that before any staff member posted an idea on the forum, it should be first approved by their manager.

“I thought it was rubbish.  Staff were allowed to speak publicly with external stakeholders, so why couldn’t we trust our own people to bring up ideas internally? It was completely contrary to the concept of open, cooperative, conversation. There was no point in doing the forum unless it was available to everyone and it was completely unmoderated; so I defended it passionately and I ultimately got it up and running.”  In all the years since, very few posts have been removed.

“The Innovation Manager role at Landgate is one of the best roles in the public sector, but innovation requires fresh ideas and new passion.  You shouldn’t get comfortable.”

The influence of the innovation program has changed Landgate’s operations. In addition to its core business Landgate now also provides consulting services, develops and sells data products, and even starts or invests in companies.

“We partnered with a US startup using technology developed for the Mars rover to commercialise imaging software in Australia,” Jodi said. “We’ve also invested in a cloud-based land-title system. We couldn’t find one, but we found others who also needed one, so we built one.”

“We’ve seen a number of our good people move out of our innovation program and into running similar programs in other businesses,” said Jodi. “It’s fair to say that Landgate’s program played a significant role in spawning an innovation culture across the broader sector.”

These forms of innovation have helped Landgate become financially self-sustainable, which is vitally important during a property downturn.

“The innovation program is all about producing good business outcomes – which it has done,” Jodi said.  “Sure, it’s fun – but it’s hard work and the spotlight is on you to deliver for the business”.

Jodi credits the Signature Leadership Program for helping her shape her thinking around innovation and doing things differently.

“I enrolled into the Signature Leadership Program as I expected it would enhance my management skills and broaden my network,” Jodi said. “I made really good friends who I continue to stay in touch with.  What was unexpected was the Program’s focus on innovation – how organisations can and should look at internal processes regularly and differently to better meet the needs of their customers.  Following a particularly vibrant presentation from Professor Lyn Beazley I was hooked.”

“It’s been incredibly satisfying to see Landgate’s innovation program evolve and grow from strength to strength.  Now with Finance, we get to shape a similar program, but in a different way – it’s our own, unique program with our own, unique set of challenges.  Finance delivers a broad range of services to the community and provides advice across the sector, so I see enormous opportunity to improve how we do this – and I’m sure many people in our business will have ideas of their own.

As a final question, we asked Jodi what she would change about leadership in Western Australia if she had a magic wand. Her response was characteristically brave and authentic:

“I believe we have good leadership.  Geographically, Western Australia is on the leading edge of Australia – facing the developing economies of Asia, the Middle East, Africa, and with a direct link to Europe.  We’re in a unique position to lead.  We need to embrace our ‘leading edge’ status and make the most of our differences from the eastern states.

“Our diversity has always led us to put up our hand and accept the challenge.”