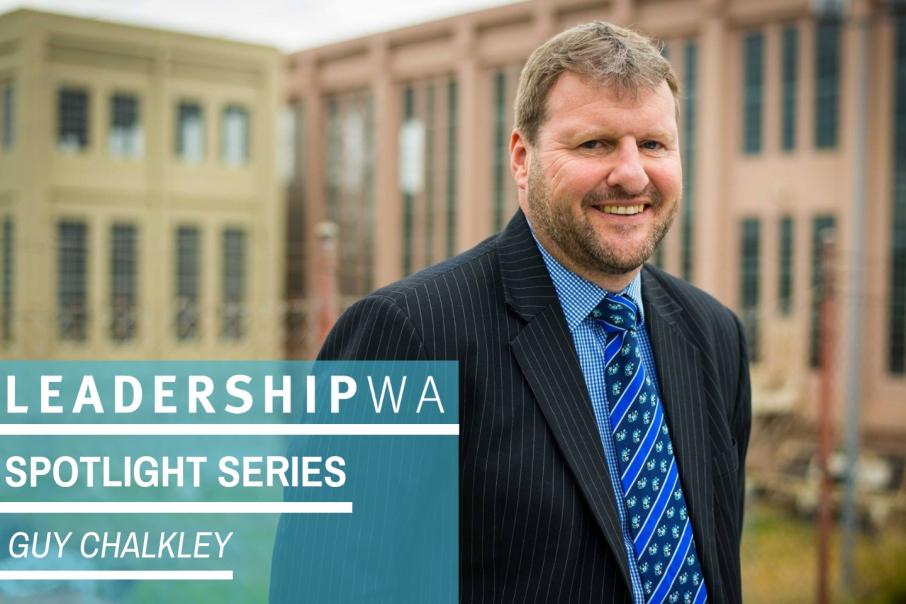 Guy Chalkley is CEO of Western Power. He has worked across a diverse range of sectors in various continents including Asia, Africa, Europe, North and South America, and Australia. In 2013 he completed Leadership WA’s Signature Leadership Program, is a graduate of the Australian Institute of Company Directors (AICD), Fellow of the Association of Chartered Certified Accountants (FCCA) and is a member of CEOs for Gender Equity.

With its vast open spaces, low population density, harsh weather, delivering first-class utilities across Western Australia has always been a challenge. Increasingly, these challenges are being solved through innovation. But according to Guy Chalkley, CEO, Western Power, West Australians have always found a way.

“If you travel through WA, it’s amazing to see where some of the wooden poles are, and consider how somebody actually managed to get them there in the first place. It's pretty amazing to see somebody repair one that’s been taken down by a storm. I think it is part of the psyche of people from WA; it's just something that they've driven through.”

But the old “tough it out” approach is changing with technological innovations across the State. These changes, in turn, are changing the ways regional towns operate. One example is Kalbarri; located 140km from Geraldton, the nearest power hub, Kalbarri often experiences outages due to extreme weather taking down the powerlines. To give Kalbarri’s energy supply greater reliability, Western Power, in collaboration with EMC and Lend Lease, are building a renewable energy-powered microgrid that kicks in if the Geraldton feeder line is interrupted.

“Kalbarri will show you can use the power of renewables and batteries to effectively create a grid that can eventually become self-sufficient. There is a future where they potentially don't need the feeder line.”

“It's not just a case of buying time to repair the line. It can be just as reliable without the line. Instead of spending hundreds of millions of dollars replacing poles and wires, we’re thinking differently for our customers. That's where we really want to focus on for the future.”

Western Power connects homes and businesses to energy through its network infrastructure, with 52% of overhead assets serving less than 3% of customers. There is an opportunity to provide customers with different energy solutions as technology evolves.

Many innovators and investors see WA’s size and sparse population as an ideal place to test new energy solutions.

“People are coming into WA to pilot their product and partner with us to put a workable, alternative solution on the ground. WA is in a unique niche position now, in that we can offer those innovators the sandpit and act as a test case for where they can actually place their products.”

“We've got extremely good sun, we've got pretty good wave, and we've got fairly good wind. So, from a renewables point of view, we're a bit of a hotbed in terms of where people want to come to.”

With innovative energy projects across the State, including Carnarvon and Newman, it’s easy to see why innovation will transform WA’s energy distribution. Guy says that WA’s future energy needs will be met by a range of options and all will be led by innovation – whether the answer is microgrids, nanogrids, standalone power systems, or other solutions.

“Customer generally lead innovation, and innovation often gets in front of legislation, government policy and regulation, but then you've got such a shadow that can actually prove it works.”

“Uber would be a classic example. Uber happened, and people can fight and fight it and fight it, but at the end of the day they gave the customer an affordable option that was just as safe and reliable.”

For Guy, large scale battery technology could be the final thing needed to make renewables work from an infrastructure POV.

The network accommodates any type of generation from solar, wind and other renewables to more traditional sources. The grid will always be the connection that allows electricity to flow between generators, users and in the future – sharing between customers.

By championing self-sufficiency, innovative energy solutions also have the power to change how regional WA lives and operates. A current project at Perenjori, 350 kilometres north of Perth, offers a few hours of battery energy storage in case the town is cut off from the main energy supply.

“The real goal is, just because you're in a more remote community, doesn't mean you have to have a worse supply than someone in the metro area. That's got to be the goal, that a remote or rural customer can have something just as good.”

It’s not just local innovations that WA can embrace. With 50% of the world’s lithium – an essential mineral for batteries – coming out of Greenbushes, WA is perfectly placed to position itself as a global innovation leader.

“There is always vagaries about how long the sun shines, the wind blows and when. The gamechanger was always going to be storage.”

And while the rise of lithium batteries has made home energy storage more affordable, the real gamechangers, according to Guy, are utility-scale batteries.

“The investment's there and the batteries are getting bigger. They are getting put into the network. People are using them to take the intermittency out of renewables and making it storable.”

“We've got to harness that opportunity.”

Despite Guy’s handle on the complexities of energy distribution needs of Western Australia, his background is in British finance. But Guy doesn’t believe that puts him at a disadvantage. If anything, the diversity of experience helps.

“I've been fortunate in my career that I’ve worked in a lot of different industries, including two different utility industries – water and electricity.”

“It’s no different wherever you work. People are people. It's the people who lead your businesses, and if you can get the most out of your people and teams, you'll get a good outcome.”

The experience of working in Europe was particularly helpful for Guy to help Western Power to avoid mistakes that didn’t need to be made.

“The electricity industry in WA is in its fourth regulatory period. The UK was way into double figures. I could point to examples that wouldn’t work because they had been done overseas.”

But just because Guy had the experience, didn’t mean becoming a CEO in Western Australia didn’t require a leap of faith.

“As a leader in a new organisation, you've got to take a leap of faith that somebody below you is going to know more than you. You have to trust that they're empowered, and you've got to then develop your own skills so you can offer different things at the table.”

“It's a big leap of faith, and you'll be scared the first time you do it because you want to be in the detail and you want to do it all because you can, but now you’re in a different role. It’s no different from a sportsperson becoming a captain or a private becoming a sergeant.”

Guy is an Alumnus of Leadership WA’s Signature Leadership Program. He graduated in 2013.

“I'd just arrived in Perth from the UK where I’d had a big network. I've met people out of Leadership WA and got a really good group of people that have moved on since being in Leadership WA.”

As a final question, we asked what Guy would change about leadership in WA if he could wave a magic wand.

“I'm a realist and a pragmatist, so I'm not good on magic wands, because I can't see what I can't see. But I think what's really important is that we're positive, that we believe, that we've got drive, and that we respect other people.”

“Someone asked me recently ‘if you had all of Elon Musk's money, what would you do with it?’ The answer is you don't need money. What you actually need is determination, drive, belief, enthusiasm, and positivity.”