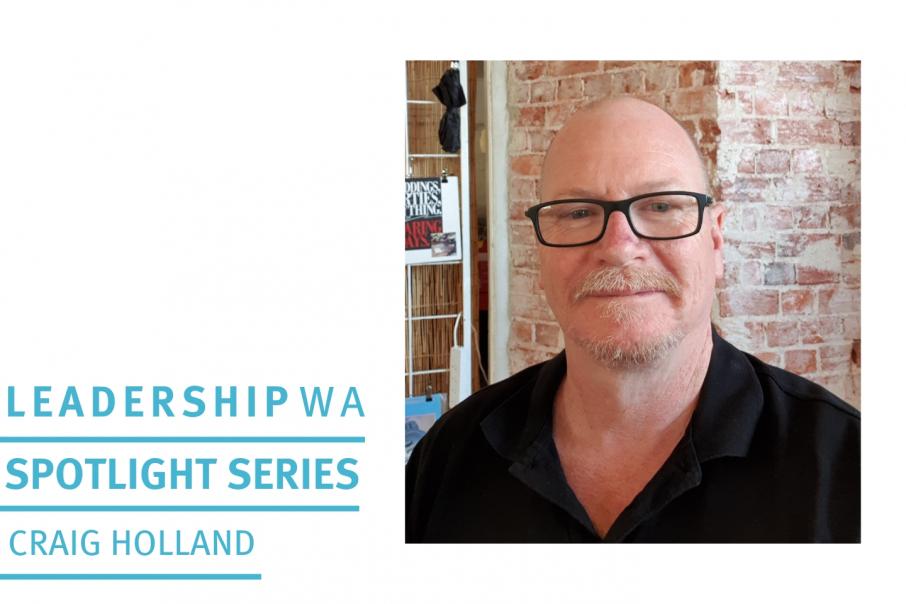 Craig Holland is the Director of Maker + Co, a Bunbury-based Coworking, Innovation and Creativity spaced focused on supporting the Innovation Ecosystem in Regional Western Australia. Craig was also the Director Business Development at West End Projects Australia; and has been the Director of Corporate Services at the Pilbara Institute. He has held various board positions throughout his career including Chair of EPIC in the Pilbara and Treasurer of Creative Corner in the South West.  Craig is a graduate of the 2012 Signature Leadership Program.

The first thing we asked Craig was to define his leadership style. But given Craig has worked in both the State Government and his own small business, he has had to change his style of leadership over time.

“In the public sector I oversaw a large team of managers and support staff, so my ability to lead that team of people was essential. It really did take up a lot of my thinking.”

“In small business and the private sector I haven’t had that massive team around me. It’s really been myself and my wife driving our small business. This changes your leadership style from being an exemplar and motivator to collaborator and connector.”

This change in thinking was a conscious choice on Craig’s part to help grow his business.

“We are growing a small team of people over the next few years, so that more traditional leadership style will start to re-emerge when the team is established.”

“As the leader of a small business, the main areas I concentrate on are having an open door and communication channel for our business so that people will feel comfortable coming in, asking us questions, looking at opportunity.”

“It’s also about effectively communicating your business to other people and looking for those connections.”

As a small business owner and leader based in Bunbury – and as someone who has spent the majority of their life in the regions of Western Australia – Craig is well-placed to share his thoughts on what makes for a great regional leader.

“In the regions, your first priority is to generalise because you are much more likely to do more things with less resources. In the city locations you are required to do more specific things with more targeted resources.”

“Both sides of that equation can learn from one another and help one another in that process.”

One of the key problems facing regional areas and leaders has been the issue of economic longevity.

“Karratha is a good case study in this. There was the build-up and boom, and then the retraction, which hurt people for sure. We have friends who have been and are still impacted by that.  However, their efforts since at least 2010 to diversify their local economy has allowed a softer landing and a stronger base upon which they are bouncing back.”

“The crux of the answer to the question, is economic diversification. What is it in each location that attracts, retains, and provides that community and soul to the location?”

One of the key things regional Australia can focus on to bring economic diversification, Craig believes, is the culture of Australia’s First Nations peoples.

“It can be a source of enrichment, a source of learning, and a source of opportunity where that culture can be celebrated and turned into cultural tourism opportunities.”

“Each community needs to think about the other opportunities out there. What’s going to bring a soul into that location and encourage people to stay there long-term, even after the booms have reduced or finished?”

Does the Government have a role in encouraging this diversification?

“Personally, I believe yes. They need to take that helicopter view of regional areas and assess how decisions impact on and provide opportunities in regional areas. This includes infrastructure development, supply chains, economic diversification and new industries that have the potential for sustainable longevity.”

Craig participated in the 2012 Signature Leadership Program at Leadership WA.

“The Signature Program was just amazing for me. I just met amazing people who I’m still in contact with.”

“What Leadership WA did wonderfully well was open my eyes to some of the leaders in WA at a very high level and look at all aspects of the community including for-profit, not-for-profits, small business, large business, and government.”

“When my family moved from the Pilbara to South West, one of the first things that I did was contact Leadership WA and said, ‘Look, we’re moving, and can we be connected in to a few things that are going on?’ That’s a massive strength of Leadership WA.”