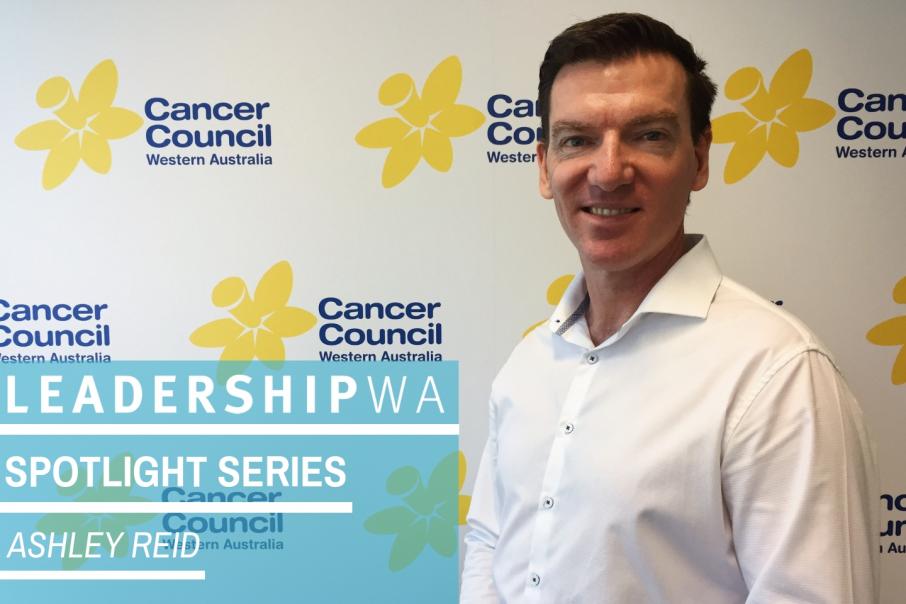 Ashley Reid is the CEO of Cancer Council WA, which celebrates its 60th year of operation in 2018. Prior to his appointment at Cancer Council WA, Ashley was CEO of Ngala for five years. With over 20 years’ experience in the community and public sectors, Ashley has demonstrated a strong commitment to social justice and advocacy. Ashley is a graduate of Leadership WA’s 2007 Signature Leadership Program.

Over its 60 years of operation, Cancer Council WA has helped an immeasurable amount of people through its support services, investment in research, and advocacy for public health. But that good work and success isn’t just powered by good intentions. For CEO Ashley Reid, a clear mission is the first step to achieving a goal.

“I’ve seen organisations that get into the situation of chasing funding or chasing corporate support, rather than focussing on what they are there for. We have a very defined mission. Our purpose in our constitution is to reduce the incidence and impact of cancer on the WA community.”

“Of course, within that you can put almost anything. So we prioritise to bring our strengths and capabilities to making sure we achieve that purpose. The way we do that is the hard part.”

In the current economic environment, fundraising to achieve these goals is difficult. That’s why Ashley and Cancer Council WA use a message of hope to cut through.

“The gains have come through a huge investment in research, improved screening, improved diagnosis, improved treatment. So as much as we concentrate on our history and we want to honour our history, don’t live there. We’re a forward-looking organisation.”

Part of that forward thinking has included the organisation evolving to respond to broader changes in society.

“We want to bring the best and most up to date information to people, whether it’s about treatment, how to prevent cancer, or the risk factors.”

“Cancer is one of those topics where as soon as you think you might have a risk or you’ve had a diagnosis, the first thing you do is go on Google, and the information you can receive is completely unfiltered. So we are needing to re-position ourselves as not being the holder of information, but being the credible filter.”

Cancer Council WA are also the largest non-government investor of cancer research in the state, and have invested more than $47 million of donor money to research since the establishment of their research program.

“We are the custodians of donor funds and our donors and supporters expect us to do good things with them. The reason why we’re trusted is because we’re very transparent and open about how we utilise donor funds. Our absolute key commodity is trust.”

None of these gains happen quickly, though. Advocating for behavioural change is one thing, but seeing results in the community can take decades and buy-in from the Government.

“We are up against significant barriers towards good public health. We have an unsustainable health system. We all pay for it. We’re in a modern first world country with high expectations of the health system, and resources are finite. So, when working with Government, we focus on the evidence. We say, ‘you can save billions of dollars by having a healthier population.’”

One area in which Cancer Council WA and other public health advocates have succeeded by taking a long-term, evidence-based approach is prevention of skin cancers. Melanoma rates for 18- to 39-year-olds have halved in a decade. But Ashley acknowledges the added difficulty of tackling public health concerns that have the weight of industry behind them, such as the tobacco industry.

“Tobacco control didn’t take one political cycle. It took 30 to 40 years, building the evidence, going up against industry, changing government policy, bringing community and social expectations along with us.”

“The tobacco evidence took a long time to build. But once it was known, you couldn’t argue it. Government then found it easier to enact policies that changed behaviour, because the evidence was non-arguable.”

“Lung cancer is still the greatest cause of cancer death in Australia, but we are down to the lowest adult smoking rates we’ve had ever. Even as recently as the year 2000, the adult smoking rates was 25%. It’s now 12% to 13%. We’ve made incredible gains over a long period of time.”

Ashley also sees challenges in the alcohol industry, with consumption of alcohol not only being culturally embraced, but contributing to thousands of cases of preventable cancer every year.

“We’re not saying no one should ever drink, but there are health guidelines around reducing high level alcohol intake and therefore lowering cancer risk. Should Cancer Council WA say something? Yes, because that’s what the evidence says.”

“We’re in discussions around advocacy in the junk food space, restrictions on advertising to kids, and a sugary drinks tax. These kind of things come up as a significant push against industry, but it’s also about us using the evidence to have a healthier community.”

A key component of ensuring long-term behavioural changes across society is effectively communicating the evidence. This, Ashley believes, is a vital activity of Cancer Council WA.

“We know up to a third of all cancers can be prevented by using sun protection, reducing alcohol intake, eating well, exercising, keeping your body weight down and not smoking. That’s a very powerful message, and not complex.”

Ashley has now been at Cancer Council WA for over a year and is still pinching himself about it.

“I still meet people who are so grateful for Cancer Council WA. I love this job. We get incredible trust from the community to do really amazing work with world class experts.”

“The fact that we are predominantly donor funded also gives us a lot of choice. Unlike organisations that might be more government funded, we get to do things unencumbered by others. It means we can be brave.”

One of the key strengths that Ashley brought on board was his experience in community involvement. Ashley believes that by working closer with the community, there can be better public health outcomes. One stark example of this is the different rates of smoking in different communities.

“If you look at the smoking rates in Cottesloe are about 7%, but in some remote Aboriginal communities, they’re 60%.”

“We need to be focused on some of our more disadvantaged and vulnerable community members to make sure those education messages get through.”

Ashley is an Alumnus of Leadership WA’s Signature Leadership Program, graduating in 2007.

“When I did the program I was at a point in my career where I needed to expose myself to good people, good thinkers, different sectors and parts of the industry.”

“It’s an opportunity to really both question your own views of things, and be challenged with new ideas and new thoughts. The people on it were awesome, smart people at points in their careers where they were aspiring to lead teams and run organisations. There was a great energy. I built some really strong relationships with my cohort. We caught up recently for our tenth anniversary, which was just fantastic.”

“I’ve still got the notes I took. I look at them occasionally and think, wow, that was one of those turning point experiences. It was the kind of development of that self-awareness that I really enjoyed.”

For Ashley, the emphasis on the time given for self-reflection was incredibly valuable, and something he carries with him to this day.

“We’re in an environment where everyone’s flat out. We don’t give ourselves permission to think, to contemplate.”

“We treat taking time to think as a luxury, whereas it’s actually the core part of what we’re here to do. We need to discern deeply on complex things. We never have enough time or resources or information, and yet we have to make decisions that will affect both the organisation, the people we employ, and the people we serve. That is a profound responsibility.  Leadership WA taught me that giving myself time to think is not a luxury; it’s essential.”

As a final question, we asked Ashley if this approach still feeds into his management style all these years later.

“I hope so. I talk to our management team about how time to think is not a luxury. It’s an essential part of our job, because we’re all smart, all talented, but we’ve only got so many hours in the day.”

“Modern organisations are becoming more collaborative thinkers. There are moves to more self-managed teams and flatter structures with much less hierarchy. People feel much more valued in their jobs if they’re autonomous, without creating a risk for the organisation.”