Kairos Minerals has added a major new nickel-copper and gold target at its 100 per cent owned Roe Hills project east of Kalgoorlie in Western Australia. Extensive geochemical sampling has defined a 1km nickel-copper anomaly with values going as high as 3,120 parts per million nickel. In addition, possible gold extensions to mineralisation at the Caliburn prospect have been identified. 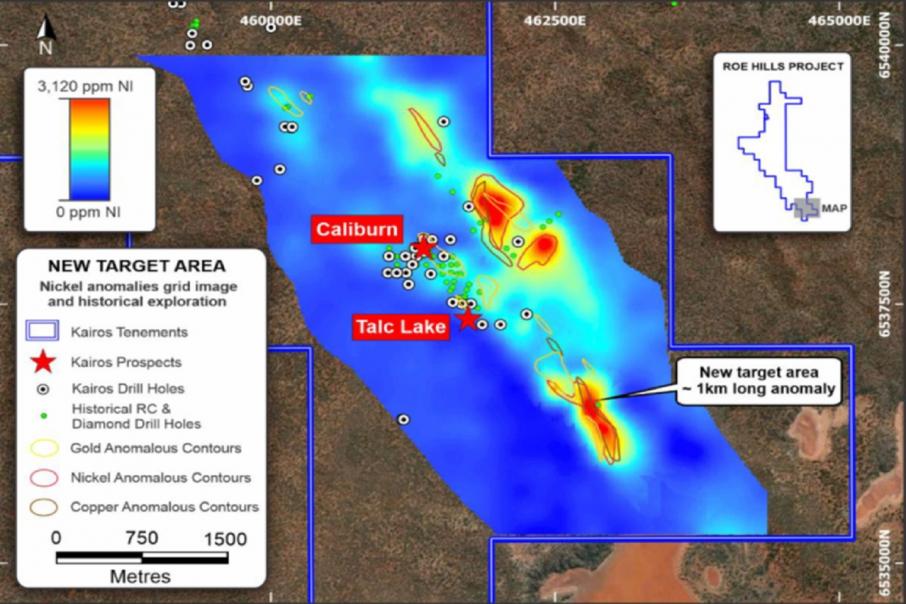 Kairos Minerals has added a major new nickel-copper and gold target at its 100 per cent owned Roe Hills project east of Kalgoorlie in Western Australia. Extensive geochemical sampling has defined a one kilometre nickel-copper anomaly with values going as high as 3,120 parts per million nickel. In addition, possible extensions to gold mineralisation at the Caliburn prospect have been identified.

Kairos recently wrapped up the soil geochemistry program at Roe Hills where some 2,200 samples were collected to test for extensions of targets defined through prior exploration and regional geophysics.

The 1km target area, at the southern end of the Roe Hills tenure, also returned up to 403ppm copper and elevated gold, platinum and palladium values.

The company says the new target area takes in some 800m of strike with elevated nickel and copper, in addition to a gold anomaly stretching for more than 1km.

Curiously, a secondary nickel anomaly has also been identified about 2km north-west with sampling returning values going as high as 1,590ppm nickel and 338ppm copper.

Kairos Minerals Executive Chairman, Terry Topping, said:“The identification of these extensive nickel-copper and gold targets are a very exciting development which stems from our ongoing collaboration with the CSIRO in utilising their proprietary Ultrafine+ geochemical sampling technique. It’s rare to see such a large, strong and coherent nickel-copper and gold target from geochemical sampling and this represents a compelling drill target in a completely unexplored area 1.4km south of our Talc Lake nickel prospect, where recent drilling has encountered nickel sulphides.”

In a boost to the regions prospectivity, the company said that the sampling program has also expanded the gold target at the nearby Caliburn prospect.

Recent drilling at Caliburn returned encouraging gold intercepts including 8m at 1.32g/t gold from 32m and 8m at 1.29g/t gold from 56m in the same hole. Another hole returned 16m and 1.27g/t gold from 80m with a higher grade 4m interval inside going 3.17g/t gold from 84m.

Interestingly, Kairos reports there has been no previous drilling where the new anomalous target has been defined and the explorer is set to punch the first holes into the virgin ground before the year is out.

The company is now eyeing out a drilling campaign across the new targets later in the year. Re-interpretation of recently processed geophysical data to pin-point drill locations has already commenced.

Kairos could be in for a big end of the year as it looks to unravel the value of a treasure trove of the new and high-priority nickel, copper and gold targets at its Roe Hills tenure.