A giant Japanese resources house has thrown its weight behind ASX-listed Hammer Metals in a $6 million joint venture which seeks to unlock further mineral wealth in Queensland’s highly prospective Mt Isa region. JOGMEC is looking to earn 60% of a 290 square kilometre portion of Hammer’s 2,200sqkm Mount Isa project, where the targets are massive IOCG ore bodies similar in style to the giant Ernest Henry deposit. 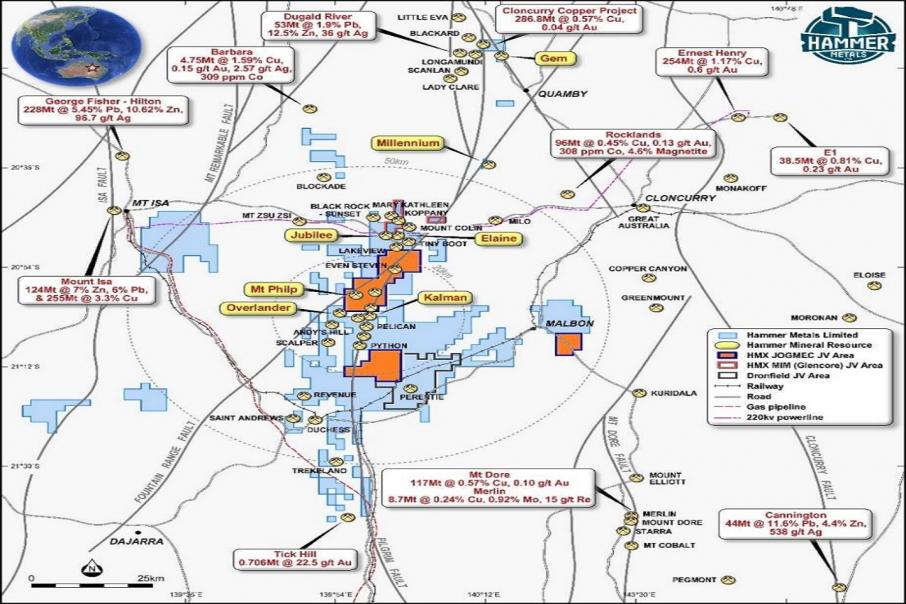 The Japan, Oil, Gas and Metals National Corporation, known as  “JOGMEC”, is looking to earn a 60% interest in a 290 square kilometre portion of Hammer’s 2,200sqkm Mount Isa project, where the targets are massive iron-oxide copper-gold, or “IOCG” style ore bodies similar to the giant Ernest Henry deposit.

Ernest Henry has so far yielded 220 million tonnes at 1.1% copper and 0.5 grams/tonne gold.

The JV covers sections of Hammer’s Even Steven, Mount Philp, Dronfield West and Malbon target areas, with JOGMEC now committed to pay at least $1 million by the end of next March to retain its interest in the multi-million dollar deal.

Hammer will manage the exploration activities, with the initial focus being on the collection of high quality, geological, geophysical and geochemical datasets.

Whilst a final work program is yet to be agreed upon by a joint management committee, it is expected it will include additional geophysical surveys, detailed mapping and infill geochemistry at the Mt Philp Breccia, Even Steven, Dronfield and Malbon East targets.

A Government funded, but independent administration body with a brief to ensure a stable supply of mineral and energy resources for Japan, JOGMEC last year generated total ordinary revenues of around USD$1.62 billion from its global activities.

The company has already established strong ties in Queensland, originally signing a memorandum of understanding with the state government during 2013 to encourage Japanese companies to invest in natural resources projects.

According to the Department of Foreign Affairs and Trade, in 2018 Japan was Australia’s fourth-largest source of foreign direct investment after the US, the UK and Belgium.

Once the $6 million has been committed, with the final payment date currently pencilled in for March 2024, Hammer and JOGMEC can elect to contribute to their pro-rata share of future funding. If either party does not contribute, and is diluted to less than 10% of the JV, its equitable interest will convert to a 2% net smelter royalty, which at any time can be reduced to 1% via a $2 million payment.

Hammer Managing Director Daniel Thomas said: “The Hammer team is excited that JOGMEC shares our vision that a large tonnage IOCG deposit such as Ernest Henry is present within our Mount Isa project area.”

“The ability for Hammer to attract a quality partner such as JOGMEC supports Hammer’s approach in the identification of early stage exploration targets and prospect generation.”