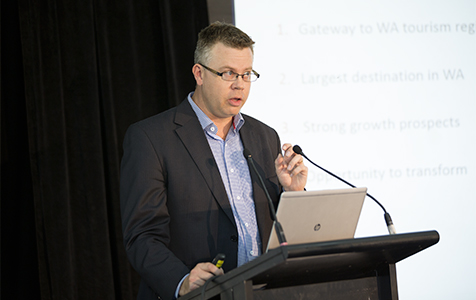 Transport infrastructure, hotel and conference capacity, and red tape in the approvals process for new tours have been identified as the biggest barriers to attracting an additional 9 million visitors each year to Western Australia.

The Tourism Council WA today launched its Destination Perth strategy paper, which identified the infrastructure, accommodation, experiences, attraction and events needed to grow the state’s annual visitor numbers from 13 million to 22 million by 2020.

Doing so would double the value of tourism spending from $6 billion in 2012 to more than $12 billion by the end of the decade, as well as create 11,000 new jobs.

The discussion paper identified 10 key areas that needed to be addressed to attract new visitors to Perth, including the establishment of an iconic event, upgraded infrastructure, flagship attractions, improved customer service, and sustained investment in key precincts such as Elizabeth Quay, the city’s beaches and the Swan River.

Aspirational events and experiences such as a ‘River of Lights’ flotilla along the Swan, an indigenous cultural centre at Elizabeth Quay, and a cable car to Kings Park were discussed in the paper, but the most important area, according to Tourism Council chief executive Evan Hall, was transport infrastructure, including the redevelopment of Perth Airport and the promised rail link.

“The investment that is already under way and planned for the next couple of years at Perth Airport is amazing, it will dramatically improve the visitor experience and the capacity to move people through the airport; but where it really starts to work is when you connect it with land transport options,” Mr Hall said.

“This is a real destination changer. Part of our accommodation challenge is immediately resolved by having rail links; people will suddenly see Subiaco as an accommodation destination because they can move around easily from the airport.

“People can also go straight down to Rockingham and Mandurah, it just makes it perfect for the family and budget traveller as well.”

The paper also said Perth needed an additional 1,900 hotel rooms and a broader range of accommodation to be able to attract the desired number of international and interstate visitors.

Mr Hall said hotels were a critical part of Perth’s ability to attract visitors, and hailed the state government’s hotel development incentive scheme, which was starting to open up private sector investment.

“The rooms are coming, but … it is not easy to build hotels in this town,” Mr Hall said. “It’s not just about money, it is about planning, it’s about approvals, and it’s about the political will to make sure it happens.

“We’re not going to see those rooms just come tumbling through, but we need a broader range of accommodation than what we’ve currently got and what we’re currently building.”

In the conference space, Destination Perth said the city needed an additional 6,000 square metres of event and exhibition space, most of which will be satisfied by Crown Towers, the Westin and a luxury hotel planned to be built at Elizabeth Quay.

But if Perth was to truly capitalise on its potential, Mr Hall said the Perth Convention and Exhibition Centre would need to nearly double in size to 30,000sqm.

“This is a key part of the state government’s infrastructure in the visitor economy space.

“If we want to remain competitive and if we want to get an additional share of the international conference market, we need to expand that space.

“That also gives us the opportunity of making sure it is a part of the skyline, it is seamlessly part of Elizabeth Quay and a beautiful part of the city.”

Another crucial area in establishing Perth as a top tourism destination is addressing the red tape in the approvals process for new tours and adventure activities, as well as stringent liquor and retailing regulations.

With the state government already progressing reforms for liquor and retail, Mr Hall said the Tourism Council was also seeking fundamental changes in the approvals process for experience and adventure tourism.

He said Perth’s climate and natural setting on the Swan River gave it a comparative advantage as an adventure tourism destination, but the biggest challenge was being allowed to do so.

“What we do is create unusual things that are great experiences for people to do, and sometimes government has a really hard time dealing with that because we are asking for something outside of the box,” Mr Hall said.

“It is extremely difficult to get up anything new, particularly anything that is adventurous or interesting or challenges the norm about what we can approve.

“It’s a very hard path for us to walk and certainly we want to work with the government on fast-tracking these sorts of experiences.”

Segway Tours was finally approved last year to operate along the Swan River foreshore and at Rottnest Island, after initially pitching its plan to the Department of Transport as far back as 2007.

Catalina Adventures, which has spent millions during the past two years to establish seaplane tours from the Swan River to Rottnest Island, is still mired in the approvals process and has yet to launch a single tour.

“The sad truth is that we are currently losing tours faster than we can create them, it is a very challenging process,” Mr Hall said.

“For example we’ve lost the helipad, so we’ve lost an existing tour operator and another tour operator who wanted to start these services, and until we can identify a helipad we won’t be able to bring that back.

“We’ve got fascinating new experiences like Catalina Adventures seaplanes on the Swan that still hasn’t got through the approvals process yet.

“We’re still going through all these challenges just to get exciting experiences that people absolutely want to do.

“People are looking for new things to do and new ways to enjoy the city and we’ve simply got to let them do that.”