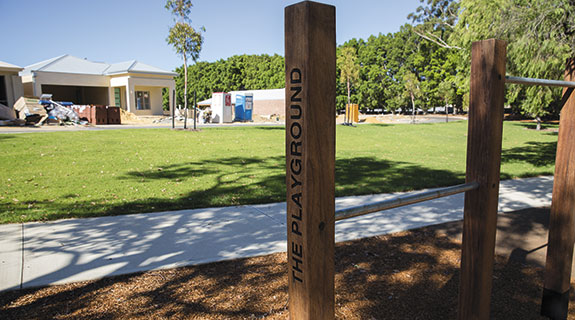 PARKS AND RECREATION: Community amenity is a significant focus of infill developments, like The Playground at Coolbellup. Photo: Attila Csaszar

The state government’s push for urban infill is providing opportunities for developers away from the outer fringes of the city, but a lack of suitable sites is hampering their ability to hit mandated targets.

Perth’s planning framework, ‘Directions 2031 and Beyond’, mandated for 47 per cent of all new housing development to occur within the existing boundaries of the Perth metropolitan area.

In a report on the progress of the first five years of the plan released late last year, the state government revealed just two local government areas out of 32 were tracking ahead of that target.

Nonetheless, the state government’s ‘Urban Growth Monitor’ report, also released last year, identified the potential for 14,500 homes to be built in infill areas within the next five years, with a further 40,000 dwellings anticipated in the medium to long term.

According to the report, about 70 per cent of those homes are proposed to be located in the central sub-region, the inner ring of suburbs near Perth CBD.

Department of Planning director-general Gail McGowan told a recent Australian Property Institute forum that higher housing density per hectare was a core priority of the department, as was a reduced reliance on greenfields developments.

Ms McGowan said the department was looking carefully at where the most appropriate opportunities for growth and increased density were across the metropolitan area.

“It doesn’t mean we lose the heritage of our suburbs,” Ms McGowan said.

“There are obvious places that lend themselves to revitalisation and reinvigoration and allow us to use our systems of transportation and our existing infrastructure effectively.”

Most of the infill projects already under way are joint ventures between state government agency, LandCorp, and private sector developers.

At Perry Lakes, where the built form is predominantly medium-density townhouses and villas as well as apartments, LandCorp has teamed up with TRG Properties to develop 156 lots, all of which sold out shortly after marketing was launched in 2012.

Another sporting arena being converted to an infill development is Claremont Oval, where LandCorp is partnering with Mirvac Group and Georgiou to redevelop the oval into a residential enclave to be called Claremont on the Park.

Georgiou started construction of the first project at Claremont on the Park, a 73-apartment building, last year, while Mirvac unveiled its plans for a 143-apartment project at the oval last week.

Two significant infill projects launched during the past two years in Coolbellup have also been the catalyst for the near-Fremantle suburb to become one of Perth’s best-performing locales in terms of capital growth. 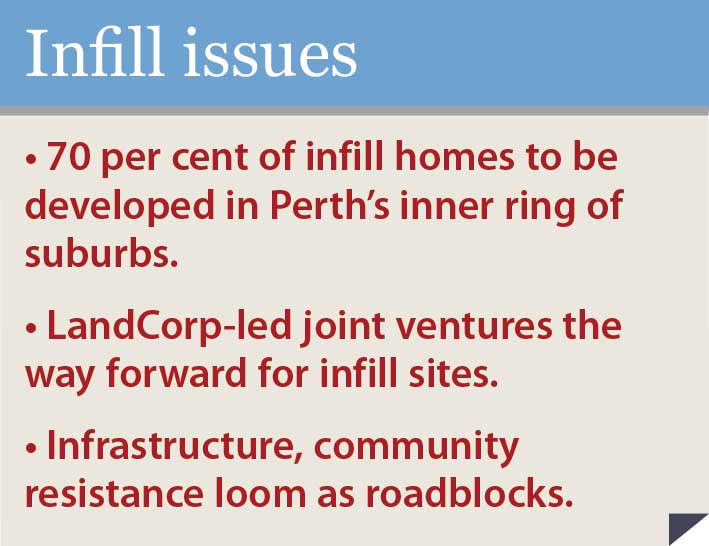 LandCorp entered a joint venture with Lend Lease to redevelop two former schools sites, known as The Primary and The Playground, which have delivered 112 housing lots, helping existing homes in the suburb record a 20.2 per cent lift in median values over the past 12 months, which is the third highest in the metropolitan areas.

Demand for the lots was so high they had to be sold via a ballot system, while a third school site in the suburb, the former Koorilla Primary School, is up for redevelopment early next year.

Closer to Fremantle, LandCorp has partnered with the Knutsford Consortium, comprising FJM Property, Georgiou Capital and Mainpart Holdings at the Knutsford Precinct, which will deliver 109 dwellings over two stages on former industrial land.

LandCorp is developing another former school site in the north, the former Craigie Senior High School, into 26 housing lots in joint venture with ABN Group and Stockland.

In September last year, the government released a list of 20 land-related assets for sale over the next year or so, with at least seven, including the Shenton Park Hospital, Princess Margaret Hospital, Woodside Maternity Hospital and the School for the Deaf in Cottesloe, considered appropriate for medium to high-density residential development.

However, due to the relatively small lot yield and tight availability of those sites, Cedar Woods managing director Paul Sadleir said it would be difficult to meet the 47 per cent target in the short to medium term.

“Sites like (Carine Rise), that are 12-14 kilometres from the city, close to the coast, they will always be sought after, but they are few and far between so we wouldn’t base our whole business around it because there are just not enough sites coming through,” Mr Sadleir said.

“While they’ll be well sought after by both developers and consumers, they are just a small part of the total market.

Along with the infrastructure challenge, according to QUBE Property Group managing director Mark Hector, the availability of sand loomed as another barrier to the infill roll out.

“There are a lot of areas in which developments are now occurring which have drainage challenges, and with that you have to bring in larger quantities of fill,” Mr Hector said.

“It’s a matter of finding the right balance between the quantity of fill and drainage systems that will perform as required.”

“The government has its targets for infill, and in relation to the other capital cities, Perth has the greatest opportunity to get it right,” Mr Dutton said.

“It’s a greenfields-type opportunity, if you like, to get all types of housing products into suburbs across Perth.”

But Mr Dutton acknowledged evaluating potential infill acquisitions, and the potential for profit, was a significantly more challenging prospect than purchasing development land on the outer urban fringes.