Heat’s on for land management 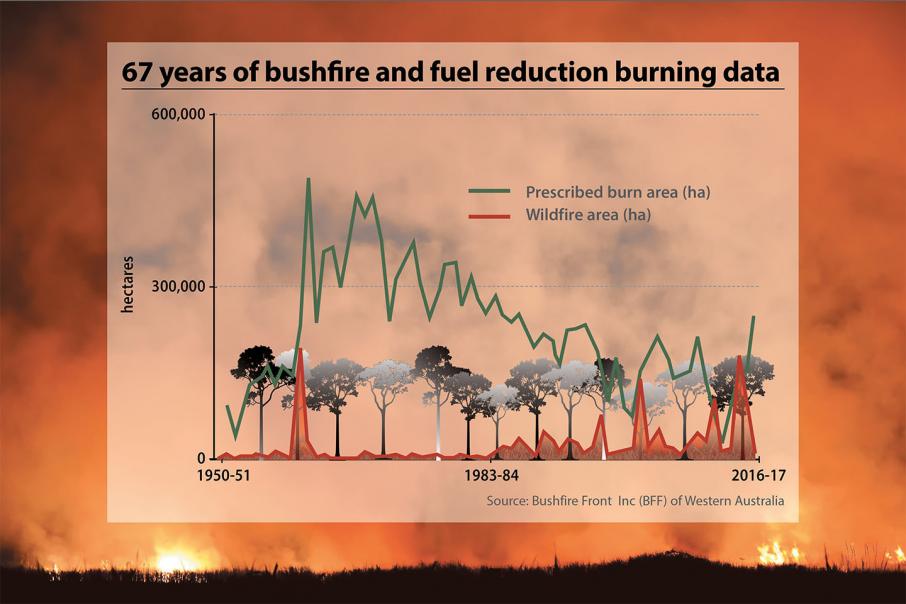 My childhood home was on a decent bush block in a suburb not far from the centre of town, as the crow flies.

The block had a firebreak around the fence line but nevertheless, every year at the start of spring we had to burn it off, as was required.

The regularity of the burning meant the resulting fire was low intensity and posed no real threat to property. In fact, even before I was a teenager, my parents felt comfortable leaving me in charge of the burn-off while they went about their afternoon pursuits.

I am sure there were downsides. I am not sure the neighbours were always warned of our intention to burn-off, and there were no doubt times when washing on the line ended up dirtier than before it was washed.

I can only imagine what it must have looked like from Kings Park or other natural vantage points, although I doubt we were the only ones. There must have been fires all over the place.

Despite this burning bush in the middle of suburbia, I recall no stories of fires raging out of control, ember attacks on neighbours or smoke embracing the city like a London fog.

I can only imagine what people would say now if a 12-year-old child was left to manage a deliberately lit fire while the parents went off to play tennis.

So what has changed?

Firstly our risk aversion has increased, partly due to a growing understanding about consequences if things go wrong but also partly because we factor in the most extreme possible outcome and try to rule it out.

So now instead of people burning off around their homes where it would sensible to do so, particularly in semi-rural and regional areas, they are discouraged by rules and regulations. In fact, people are told to change behaviour when the fire risk is greatest, rather than acting earlier to reduce the fire risk.

This advice runs counter to that of earlier times, during which greater attention was given to minimising fuel loads, particularly in rural communities and state forests, which were managed to preserve the asset – trees.

Burning off is sensible. Anyone who understands Australia’s natural history will know the land has evolved and adapted to fire.

As Tim Flannery so eloquently explains in his seminal work The Future Eaters, the Australian landscape, especially its flora and fauna, was shaped by the Aboriginals’ use of fire.

The indigenous people would decamp from an area and set it alight. When they returned a year or two later the bush would be regenerating, while the new plant life attracted animals they liked to hunt without thick undergrowth to hinder their efforts. It was synergistic.

But these are not the fires we have seen this summer. The historical regular burning of the fuel load meant fires of the past hugged the ground, slowly creeping across the undergrowth without the heat that exploded to the canopy or baked the soil.

As kids we were taught that, when confronted by fire, we should wrap up in a blanket or stay in the car, wait for the fire to move over us and then run into the newly burned area. That sounds inconceivable when you hear of the ‘express train’ fires burning so hot they scorch not just the earth but metres below it. These fires destroy everything in their path. Seeds that need smoke to trigger germination at the next rains are burned to a cinder in a modern fire.

There’s plenty of evidence of this.

Of course, there are barriers. National parks are harder to burn because people are using them for recreation all year round. The fire season is longer, which means prescribed burns need more resources to manage them in a shorter time frame, often simultaneously.

If we are expecting conditions to worsen and longer droughts in the future we ought to get smart and burn off more often, not less.

It may be an inconvenience and it does come with risks, but these are preferable to conflagration.

If you don’t accept my view then try the science provided by Western Australian group bushfirefront.org.au, which shows the impact of prescribed burning prior to and after the horror of the fires at Dwellingup in 1961.

The group says data for the graph comes from Forests Department annual reports up until 1985, when it was amalgamated into what became Conservation and Land Management. After 1985, the source of the data for the graph is the CALM and its successor bodies’ fire management branches.