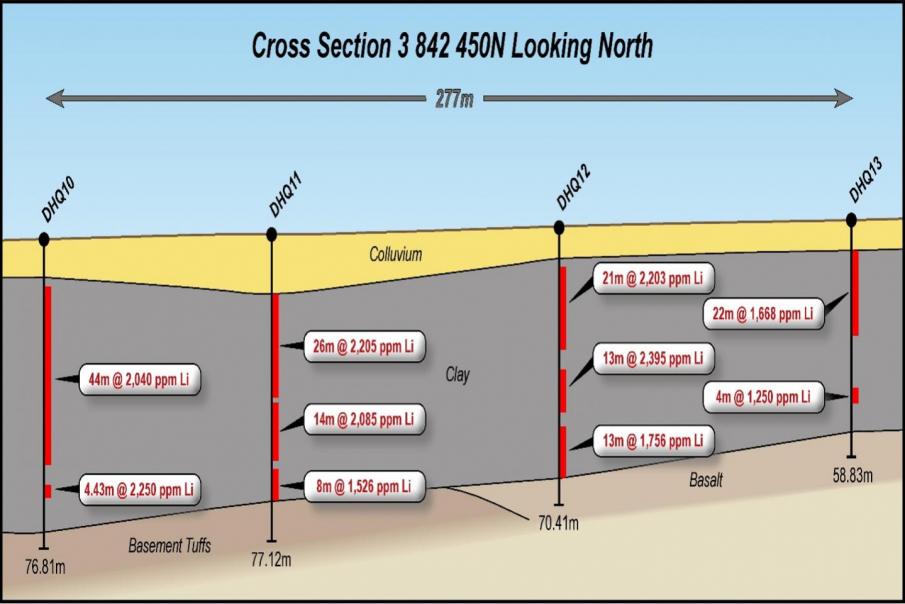 Hawkstone Mining continues to kick goals at its flagship Big Sandy lithium clay project in Arizona, US, with further impressive drilling intersections from an infill program of diamond coring this week.

The new assay results include a peak value of 4,250 parts per million, or “ppm”, lithium which converts to an impressive 0.91% lithium oxide content, a grade that is on par with some hard rock pegmatite-hosted deposits being considered for mine development.

Big Sandy’s advantage is the consistent grades and geological continuity of the “Upper Green Unit” of lithium clay mineralisation, which has proved to have simple metallurgical processing for lithium extraction in preliminary test work.

The company has now received results from 10 of the planned 37 drill hole program through the Northern Mineralised Zone at Big Sandy, which is designed to provide geological and geochemical data for the estimation of a maiden JORC-compliant resource at the project.

The thickness of the lithium clay intersections drilled to date and the regular, coherent grades of mineralisation provide confidence that this target could possibly be achieved by the company at Big Sandy.

Hawkstone Managing Director Paul Lloyd said: “The results received to date are very promising as they confirm the extension of the mineralisation over 400 metres to the north with very consistent and predictable geology.”

“The thickness and grade of the drilling results are very favourable compared to other lithium clay projects in the USA. We look forward to assays from drill holes another 200 metres further north.”

Results from the program continue to confirm two separate, thick horizons of high-grade lithium mineralisation that the company has denoted the Upper Zone and Lower Zone, although the units coalesce in places too, producing very wide individual intersections.

The current drill program testing the continuity, lateral extent, grade and thickness of these Zones has strongly supported the company’s initial geological interpretation of the project.

Based on the assay results returned from the drilling program on the Northern Mineralised Zone in the last month or so, the company is well on its way to proving up a sizeable mineral resource for Big Sandy in the near future.

The drilling campaign is expected to continue for a few more months.

Hawkstone’s Big Sandy project is situated within the US’ emerging “Battery Corridor”, which includes Tesla Motors’ Gigafactory 1, a lithium-ion battery and electric vehicle subassembly facility near Reno in Nevada, located to the northwest.

That deposit holds an ore reserve of 179.4 million tonnes grading 3,283 ppm lithium and will generate 3.135 million tonnes of lithium carbonate equivalent, or “LCE”, for the US battery material sector over a substantial 46-year mine life.

Dr Deak has over 10 years of experience in renewable energy, energy storage and electric vehicles, including roles at Tesla Inc., where Hawkstone could potentially vend its lithium products in the future.