Mark McGowan’s stance on hard border closures is politically popular at home, but let’s not lose sight of the bigger picture. 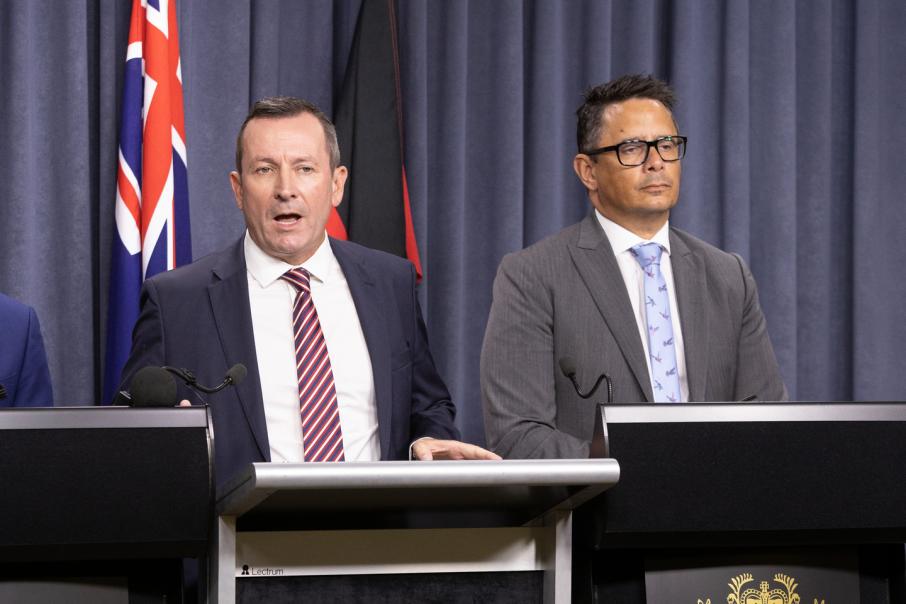 Mark McGowan’s (left) border policy is popular at home, while Ben Wyatt has called for the appointment of a WA-based director to the board of Rio Tinto. Photo: Gabriel Oliveira

Premier Mark McGowan and his Labor ministers believe Western Australia’s hard border with the rest of the country is an election winner.

Based on public opinion, that would appear correct; but at what cost?

He wants the national economy to emerge from recession and return to something like normal after the upheaval that began in March, as federal and state governments attempted to grapple with COVID-19.

The sooner that happens the sooner the unemployed are back at work, and the federal government can stop bleeding the billions of dollars in welfare money currently propping up the economy.

Victoria’s hapless premier, Daniel Andrews, and his Queensland counterpart Annastacia Palaszczuk, who is facing a state election on October 31, have attracted most attention, and criticism, for the restrictions they have imposed in their states.

The third Labor premier, Mr McGowan, has essentially been left alone, with the pragmatic Mr Morrison being aware of the overwhelming local support for WA’s hard border.

The policy has worked; community transmission of the virus in WA has been halted.

But remember, when the emergency surfaced six months ago, government policy was to suppress the virus to keep COVID’s spread within manageable proportions for the health system.

There were fears thousands of people would catch the disease and flood hospital emergency departments, with many on ventilators.

Hard international borders are doing the job, too.

But there appears no rush by the three Labor states to relax the tough interstate travel restrictions they imposed, especially while affected companies and workers are recipients of the generous Commonwealth payments.

It has been the equivalent of a blank cheque, but obviously there must be an end date to this unprecedented government largesse.

WA has become a three-speed economy.

The resources sector is going gangbusters and the public sector is also little affected, which means business as (almost) usual for 140,000 WA government workers, plus those in the Commonwealth and local government sectors.

But thousands of small businesses are struggling, held back by the closed border policy and a lack of confidence.

The longer the borders remain shut the greater the likelihood many family-run businesses will go to the wall.

So Mr McGowan has to make the call when to relax the border policy.

The temptation is to sit tight while public opinion is supportive; and that could be through to the March election, which Labor is expected to win handily.

That is still six months away.

And Mr McGowan says he will act only after receiving advice from the chief medical officer, Andy Robertson.

Is the risk worth taking?

Will it help provide the kick-start for the many small businesses that are languishing, and generate jobs?

Alternatively, Mr McGowan could hold off, win the election handsomely, but find by then that it’s small businesses in need of life support.

Rio would be well advised to heed the suggestion of federal Treasurer Josh Frydenberg and appoint an Australian CEO.

And WA Treasurer Ben Wyatt has called for at least one WA-based director (and indigenous representation) on the Rio board to reflect the fact that the Pilbara provides the majority of the company’s income, and profits.

Mr Wyatt agreed that Rio should beef up its administrative presence in WA, adding that while it considered itself to be a global company, it was actually a Pilbara company with overseas interests.

Mr Wyatt, who is also Aboriginal affairs minister, noted that outgoing CEO Jean Sebastian Jacques had failed to advise his (Wyatt’s) office he was in Perth before heading to the Pilbara recently.

They did eventually meet.

That lack of communication would never have happened during former premier Sir Charles Court’s day.

Regular communications between international mining executives and senior ministers are essential for the smooth running of such a major industry.