Geopacific Resources has revealed a 78% uplift in the estimated pre-tax net cash flows from its Woodlark gold project in PNG, based on gold prices at AUD$2,000 per ounce, compared with the base case scenario of AUD$1,650 per ounce used in last November’s DFS. The fully permitted and proposed low strip ratio open pit operation provides life of mine margins near AUD$1,000 per ounce, with payback in 1.4 years. 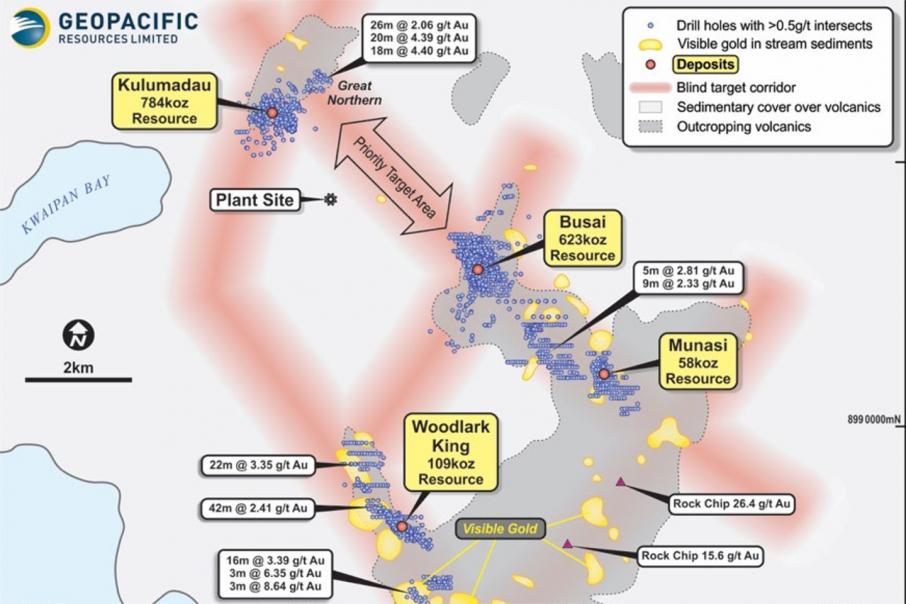 Geopacific Resources has revealed a 78% increase in the estimated pre-tax cash flows from its flagship Woodlark gold project in PNG, with gold prices now sitting more than AUD$350 per ounce above its base case scenario set out in last November’s definitive feasibility study.

The low strip ratio, high-margin, fully permitted open-pit mining operation and processing facility capable of pumping out 100,000 ounces per annum in the five years, already had robust economics before the gold price accreted over the last nine months.

The total capital establishment costs for the Woodlark gold project come in at just under $200m, with a third of those monies required to construct the processing plant, which is very respectable considering the relatively isolated location.

At the elevated gold prices, payback shortens considerably and is estimated to be only 1.4 years.

Geopacific recently acquired 100% direct ownership of the gold project, buying out fellow Australian Kula Gold’s remaining share in a cash and scrip transaction worth about $3.29m.

The company is now in the final stages of its project financing due diligence studies, with all site visits by independent technical experts having concluded.

Back in January, Geopacific said that it had received an indicative, non-binding term sheet for debt funding from an international lender and with the requested due diligence reviews now completed and no major “fatal flaws” identified, the company will be able to advance those discussions with confidence.

The company said that initial reviews of those costs showed that the pricing is in line with the DFS parameters completed last year by Lycopodium.

Mr Clyne has been part of the company’s board since 2016 and brings with him a wealth of corporate experience including most recently as Group CEO of Bank South Pacific Limited, based in PNG’s capital Port Moresby for five years.

This gold resource is also likely to balloon over time as the project has extensive gold and copper exploration potential, in a region where Geopacific holds the dominant land position on the 912 square kilometre area of Woodlark Island.

Once in production, the company will likely self-fund and potentially sustain its mining operations at the Woodlark gold project beyond the initial projection of 13 years.

The project area is blessed with flat terrain and soft outcropping ores with average metallurgical gold recoveries exceeding 90% during the first five years of production.

In addition, the company operates in the stable, proven mining jurisdiction of PNG, recently exemplified by Newcrest’s commitment of USD$2.3b to develop its Wafi Golpu gold operation on the mainland, which holds 27 million ounces.

With robust gold prices, full ownership of the project now achieved and supportive independent studies completed ahead of expected debt funding discussions, Geopacific is edging closer towards the construction, development and ultimately gold production at its impressive and undervalued PNG project.