A group of young local entrepreneurs is preparing for the official opening of a new Northbridge music venue, having identified an investment opportunity and a gap in the local live music market. 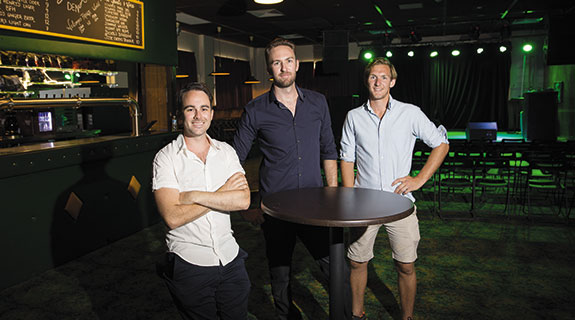 A group of young local entrepreneurs is preparing for the official opening of a new Northbridge music venue, having identified an investment opportunity and a gap in the local live music market.

Jimmy’s Den was once a gambling den in the heart of Northbridge in the 1970s, but was left behind as a venue amid the city’s evolving entertainment needs, having been predominantly used for storage in past decades.

While it has already hosted Fringe World events, the 200-person capacity Jimmy’s Den is due to officially launch within the next month, pending City of Perth approval.

The decision to acquire the lease for the venue has proved to be a prescient one, with the building that houses The Bakery live music venue going on the market last July and due to close its doors in May.​

Another live music venue, Fly by Night in Fremantle had a saviour in the form of the City of Fremantle last week when it announced the city-owned Victoria Hall would be used as Fly’s new home until at least 2017.

While the departure of the 13-year old (Bakery) venue from the market will allow room for new players, Jimmy’s Den will offer a point of difference, according to its owners.

The venue is equipped with high-quality backline, or ‘house’ equipment, electronic ticketing and booking, and a custom-made beer installation with 16 bar taps, which Mr Buckely said would increase efficiency and cut waiting times.

The group spent three times their initial budget of $100,000 to get the venue up to standard, however, they are optimistic the space has the potential to make back this investment within a year or two.