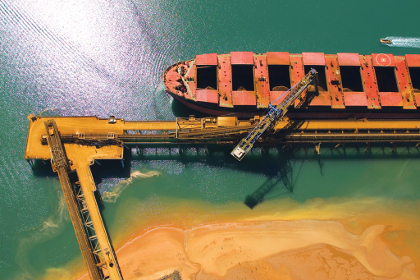 The Perth-based company mined 13.6 million tonnes (Mt) of iron ore in the three months to March 31 this year, down 15 per cent on the December quarter.

March quarter production was up 41 per cent against the previous corresponding period, however, reflecting the company's ongoing expansion in the Pilbara.

Fortescue shipped 12.5 Mt of iron ore in the third quarter, including about 520,000 tonnes for other miners, which was down 15 per cent on the previous period.

"Shipped tonnes in the March quarter of 12.6Mt were below original guidance due to the impact of two cyclones that both resulted in the closure of Port Hedland port and collectively delayed ship loading for around eight days," Fortescue said in a statement.

A planned four-day maintenance shutdown at the end of January also affected shipments, while mining activities at Fortescue's Cloudbreak mine were hampered for about a fortnight by heavy rain from Cyclone Heidi.

"It is expected that Fortescue will catch up on the delayed shipments through this current quarter," the miner said.

“Over 470mm of rain was recorded at Cloudbreak within a two-day period, which impaired operations at the company’s principal mine.”

Fortescue maintained its full year production guidance of 55 Mt, with 15.8Mt forecasted for the June quarter.

The company said 53.5Mt of this guidance would be Fortescue-owned tonnes, while the remainder would belong to third parties.

In February, the company advised that the completion of the fourth berth, which integrates with the third outload circuit, would be deferred by three months to
March 2013.

The company added it was reviewing its Pilbara-wide resources base and potential development pathways for future projects beyond 155Mt.

“Fortescue’s development work is primarily focused on the development of its hematite resources, however ongoing feasibility studies are also directed toward the combined North Star and Glacier Valley magnetite opportunity,” the company said.

Fortescue also successfully completed an unsecured bond capital raising of US$2 billion during the three-month period.

The raising was initially launched as a US$1 billion raising but was doubled following what the company called “extraordinary demand”.