FEATURE: A Subiaco based-company is using marine drones and its global remote monitoring system to deliver benefits for the offshore oil and gas industry. 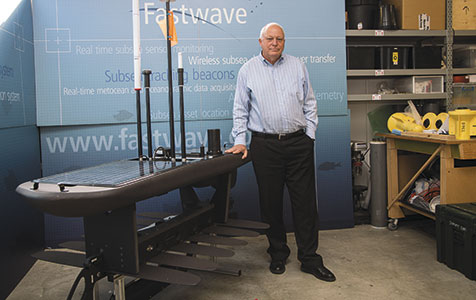 A Subiaco based-company is using marine drones and its global remote monitoring system to deliver benefits for the offshore oil and gas industry.

Fastwave Communications has taken a step-change approach to its business in response to new opportunities in the resources sector and beyond.

Fastwave made its mark with the development of its OceanStar Marine monitoring system, which can send real-time data from remote locations to users thousands of kilometres away.

The technology, which measures water quality during dredging operations as well as the impacts on local marine life, helped the company win contracts on some of the state’s largest energy developments, including Chevron’s Gorgon LNG project.

Now, the company has taken a broader (and more technologically advanced) approach and developed products that can work autonomously to detect leaks in sub-sea pipelines, marine life proximity, oil spills and pollution, as well as devices that can patrol Australia’s marine borders.

Fastwave business development director Nick Daws said airborne drones were playing as much of a role in ocean-based industries as those on land.

Two products in particular that Fastwave has integrated into its product suite are the Oceanglider, which is a sea surface unit, and Waveglider, a sub-sea unit.

Fitted with global positioning systems, sensors and communications, the gliders can be deployed to track a specific route and analyse information relayed in real time via a satellite network to the user.

Mr Daws expects the systems will reduce the number of vessels and specialists oil and gas companies require to sufficiently monitor the local marine environment.

“The oil and gas industry is latching on to this type of technology because they can see that they can do things a lot more cheaply than they have been doing in the past,” Mr Daws said.

“If you have a sub-sea pipeline, having a vessel run along a pipeline to check to see if there is a leak is a very expensive exercise; but doing it robotically reduces the cost dramatically and you can have it working 24 hours a day.”

The ultimate goal for Fastwave is for oil and gas companies to deploy their own network of the autonomous, self-propelled marine monitoring systems.

Mr Daws said there was also scope for the defence sector to use the technology to monitor Australia’s marine borders, or for environmental groups monitoring ecosystems, such as the Great Barrier Reef.

The development of these real-time data marine monitoring systems has been a result of continual research and development.

Mr Daws said the company, which employs 15 people at its Subiaco office, reinvested about 30 per cent of its revenue into R&D.

He said the company had recently beefed up its R&D department, including the appointment of an engineer, who joined the company from Rolls Royce in the UK.

“We are investing in R&D all the time. For us to remain competitive we have to invest in new technology,” Mr Daws said.

“The only way we can compete is because we tend to be quicker and more flexible than the big companies that do these things, such as defence contractors.

“We have been very fortunate because there has been a lot of work in the local (oil and gas) market for the past 10 to 12 years and we have been in the right place at the right time.

“That’s changing, and we are very conscious of that, which is why we are looking at other technologies to see how we can expand to more defence-related applications and to offer a broader spread in the oil and gas sector.”