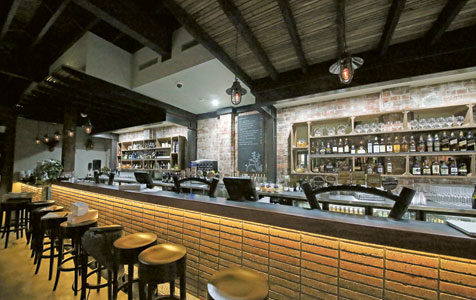 Set back from the hustle and bustle of Hay Street, behind a gated entrance and laneway that would look at home in Melbourne, The Stables Bar is the latest addition to the CBD bar scene.

The new bar is housed in an imposing pre-federation building, which in 1894 served as a horse and hay business.

The expansive building is home to two large bars set over two levels and a creative outdoor dining setting on both the ground and first floors.

Bar entrepreneur and former manager of the Subiaco Hotel Tim McLernon and former East Fremantle footballer Tony Buhagiar are the driving forces behind The Stables Bar, together with co-founder, football personality Tim Gepp.

The bar offers patrons a relaxed but sophisticated experience, with a menu designed by British-born chef Ben Keal who specialises in European cuisine and has worked in France, the UK and most recently in Melbourne.

The owners took the plunge to commit to the bar two years ago after the trio visited the Hay Street site.

“We were looking in Perth for a suitable site, somewhere that would immediately click with what we were after; the site here fitted that perfectly,” Mr McLernon said.

The building renovation cost $4 million and took two years to complete alongside a complex planning and licensing process to ensure the premises could offer more than just small-bar facilities.

“We wanted to offer a significant package, there are a lot of small bars in the city now who offer that niche at a very high standard,” Mr Buhagiar said.

The venue is licensed to a capacity of 400 people and Mr Buhagiar hopes the larger setting will create a vibrant atmosphere.

“We hope that people will be able to come here at any time of the day and enjoy a relaxed lunch, some drinks or dinner in a great environment,” Mr Buhagiar said.

Mr McLernon said a cultural shift in Perth was behind significant growth in the CBD bar scene, which has moved from an also-ran to one of Perth’s premium entertainment precincts.

“People used to leave the city at five and head back into the suburbs, in the last couple of years that’s changed,” he said.

“Now, they’ll stay after work for a drink or for a meal and on a Friday night the options in the city mean people aren’t going further afield.”

The Stables Bar has entered a market bristling with competition and, despite the challenges of opening a new venue, the owners are confident there is more than enough room.

“The marketplace in the city has grown but that doesn’t mean it’s crowded,” Mr Buhagiar said.

“It’s very important for us to have a great location and venue but having a vibrant precinct around us is just important to the success of the business.”