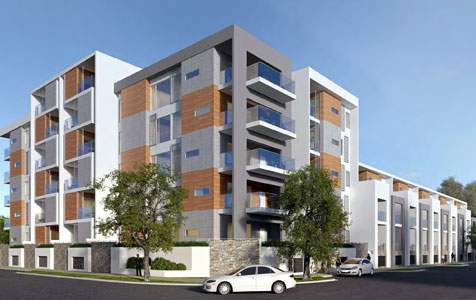 An artist's impression of the Tribeca North apartment complex.

BGC Development has received approval to go ahead with the third stage of its $97 million Tribeca apartment project at Springs Rivervale.

The Metropolitan Central Development Assessment Panel gave its nod late last week to the 85-dwelling Tribeca East project, which has a construction value of $21.6 million.

It will be built on a vacant development site, which fronts Rowe Avenue, Hawksburn Road and Regatta Terrace, and is adjacent to BGC Development’s Tribeca North and South projects.

Tribeca East will comprise 75 one, two and three bedroom apartments as well as 10 townhouses, while Tribeca North and South will comprise 92 dwellings.

The Tribeca project is being marketed by Blackburne Property Group.

The project is part of a flood of development at Springs Rivervale, with $579 million worth of apartment buildings in the area either in the sales process, approved for development or under construction.

Dominant apartment player Finbar Group is currently building Spring View Towers and sales are under way for Arbor North, which collectively comprise 342 apartments with an end value of $170 million.

The largest project, which is currently in the pre-sales phase, is Limnios Property Group’s 168-unit, $160 million Park on Swan complex.

Business News reported earlier this month that construction group DORIC had been given the nod to build Park on Swan.