Councils arc up over light costs

Several local councils are hoping the state’s assets privatisation program will give them control over one of their most significant expenses – the cost of operating street lights. 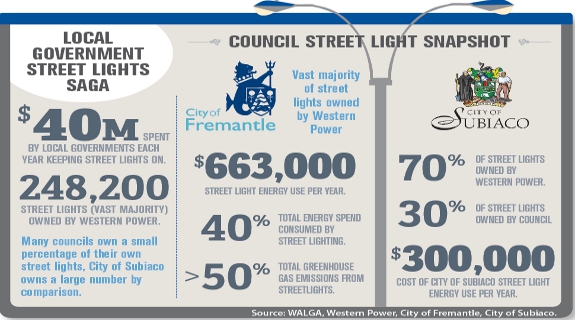 Several local councils are hoping the state’s assets privatisation program will give them control over one of their most significant expenses – the cost of operating street lights.

Operating street lights accounts for one third of all local government energy expenditure, costing about $40 million per year in total and contributing up to 50 per cent of all council greenhouse gas emissions, according to the WA Local Government Association.

As part of a number of state assets marked for privatisation to rein-in record debt, the state government has earmarked selling its network of almost 250,000 street lights, opening the possibility for local councils to gain more control either in negotiations with private owners not tied to regulated tariffs, or buying the lights themselves.

Spokesmen from Western Power and the state government both declined to provide a figure for what level of return the state could expect, citing ongoing discussions.

Mr Johnston has been critical of a street lights sale for a number of reasons, including a lack of discussion with key stakeholders, a seeming confusion over the extent of the network, and a lack of buyers (such as superannuation funds) interested in the assets.

He has backed plans by Walga to find alternative solutions irrespective to whether a sale goes through or not.

“A solution might be to give control at least, if not ownership to local government as part of a properly negotiated and thought-through process,” Mr Johnston said.

For almost a decade, Walga has lobbied for changes to regulations and non-transparent tariffs restricting councils from changing over from technology that’s almost 100 years old, such as mercury vapour light bulbs, to more environmentally friendly and cheaper to maintain LEDs and compact fluorescent lamps (CFL).

In its most recent discussion paper on street lights, the association noted that councils have been hit with largely unexplained tariffs for street lighting, which have risen by more than 100 per cent since 2007-08.

It said tariff costs and regulations meant it was not cost-effective to switch to newer technologies, prompting it to call for greater clarity behind tariff breakdowns, as well as greater cooperation from Western Power to help encourage the uptake of newer technology bulbs.

Western Power introduced CFLs into its street light network in 2011 and has used them to replace older bulbs on an as-needed basis. Today, CFLs make up 9 per cent of all bulbs in its network (compared with 60 per cent mercury vapour bulbs) and Western Power is currently assessing the case for including LEDs.

Not being able to access LEDs or replace large volumes of older bulbs with CFLs has been a long-time concern for councils, with City of Fremantle particularly vocal in its criticism.

“The current situation of requiring local governments to pay for street lighting technologies they have no influence over, under a quasi-governmental monopoly, is an inequitable situation,” the council said in a response to a Walga discussion paper on the issue.

City of Fremantle sustainability officer strategic Melanie Bainbridge said because it also operated as a carbon neutral council, switching to newer technology bulbs would allow it to save money on both energy costs and carbon offsets, savings it would then reinvest into the community.

“If there was funding ... that would help us to upgrade our stock to LEDs the energy profiles would be cut by about 80 per cent, which means that, if the tariffs reflected that, costs would go down significantly,” Ms Bainbridge told Business News.

“What we generally do with energy savings (is) put those funds back in to either renewable energy projects that further drive down the energy profile of the community, or the alternatives are there’s obviously a whole lot of services that our community wants that local government has insignificant funds to deliver, so we could ostensibly put those funds elsewhere.”