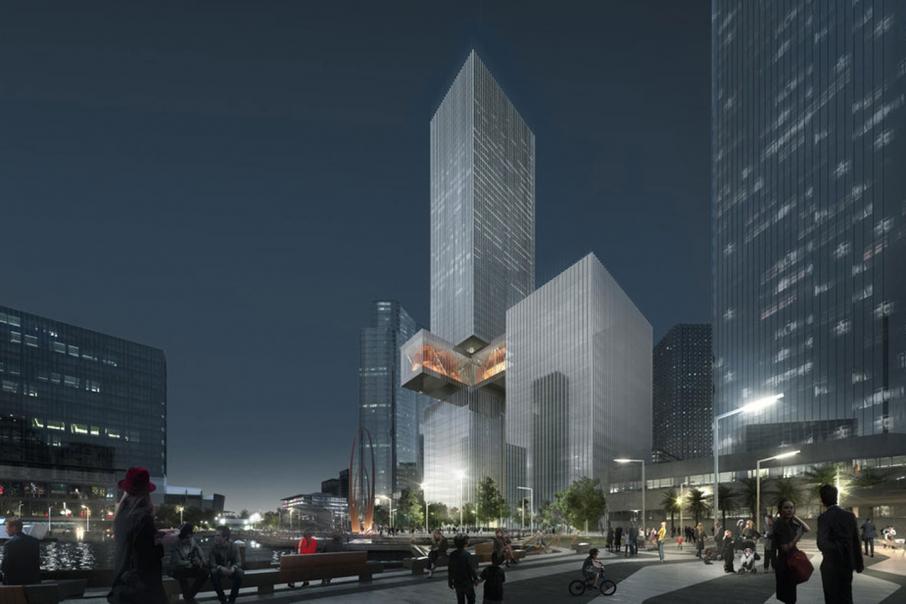 Brookfield Property Partners’ 52-storey plan for Elizabeth Quay has been endorsed by the City of Perth, ahead of any formal assessment by the Metropolitan Redevelopment Authority.

Earlier this year, Brookfield revealed its plans for a two-tower project designed by New York-based architecture firm REX, which featured a restaurant and ballroom space hanging over Elizabeth Quay midway up the taller of the two buildings.

The plan, known as Perth Plus and considered to be a centrepiece development for Elizabeth Quay, will comprise the city’s tallest building, a five-star hotel with up to 220 rooms, 15,000 square metres of office space and 220 apartments.

Canada-based Brookfield is also planning to incorporate luxury retailers on the ground floor of the development.

The development giant has been planning a major development at Elizabeth Quay since mid 2014, when it entered exclusive negotiations with the MRA over lots 5 and 6 at the riverfront regeneration project.

Initially the plan was to create a pair of office towers at Elizabeth Quay, however, demand for new office space in Perth has tanked since 2014, forcing Brookfield to reassess its options.

While Brookfield’s latest concept remains in the planning phase and a formal development application is yet to be lodged with the MRA, City of Perth councillors backed the proposal this week.

“A design of this calibre truly highlights the potential of Elizabeth Quay and Perth City as world-class tourism draw cards with significant residential, commercial, hotel and retail opportunities that will greatly enhance our city’s viability,” City of Perth Lord Mayor Lisa Scaffidi said.

“While still in early stages, the concept includes key features such as a stunning vista and addition to the city skyline; significant opportunities for public realm enhancement and activation; and a diverse range of feasible land uses.” Brookfield's Perth Plus would be a striking and defining addition to the Perth skyline. Image: REX