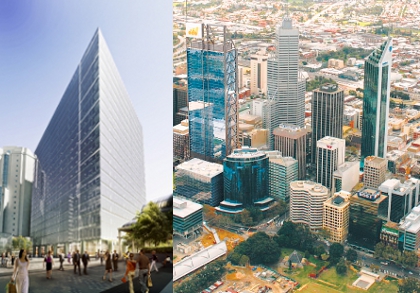 PRECINCT: An artists impression of the new tower (L), which will be developed on the Mounts Bay Road side of the under-construction City Square (R).

The City of Perth has given its approval to Brookfield’s plan to build a 17-storey office tower adjacent to its $500 million City Square skyscraper.

Lord Mayor Lisa Scaffidi said the construction of the tower would fill a long-vacant void in the central business district.

“The council welcomes this private development which will transform an eyesore into an active city locality,” Ms Scaffidi said in a statement.

“The development will also deliver much sought after office space in the central city.

“The City has worked with the developer to ensure that pedestrian movement in the area is adequately catered for and that ground-level aspects are visually appealing.”

Under the plan, Brookfield will also develop a civic plaza to the south of the City Square tower already under construction.

According to City of Perth documents the cost of developing the tower will be in excess of $21.5 million.