Hot Chili is fast-tracking the development of its world-class copper-gold project in Chile after the ASX-listed company inked an agreement with Chilean Government owned ENAMI, to mine and process the high-grade copper-gold ore from its massive Productora porphyry project. The proceeds from the deal will underpin the development of Hot Chili’s nearby Cortadera porphyry deposit that is even more impressive. 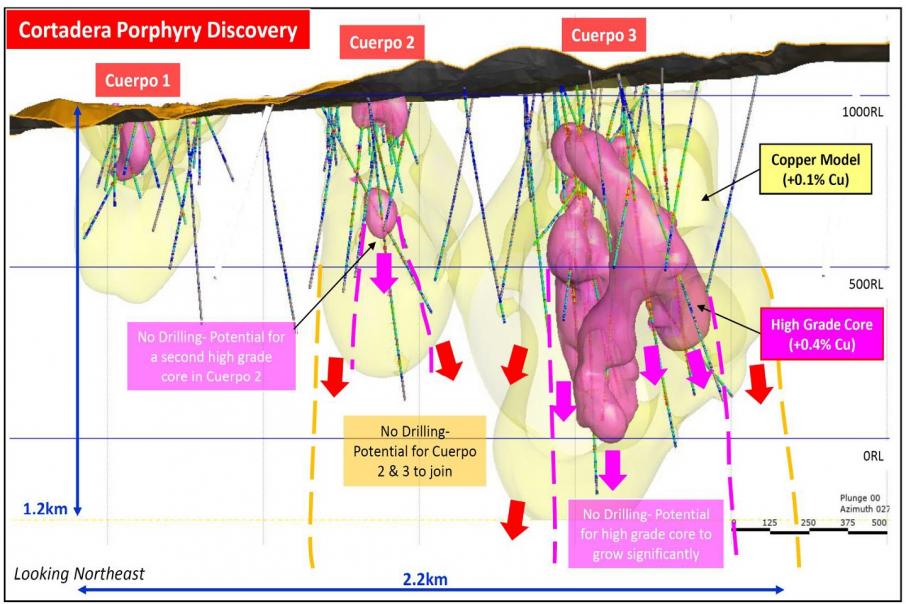 Hot Chili is fast-tracking the development of its world-class copper-gold project in Chile after the ASX-listed company inked an agreement with Chilean Government owned ENAMI, to mine and process the high-grade copper-gold ore from its massive Productora porphyry project. The proceeds from the deal will underpin the development of Hot Chili’s nearby Cortadera porphyry deposit that is even more impressive.

Empresa Nacional de Mineria or “ENAMI” is a Chilean Government owned agency that owns the Vallenar mineral processing facility, just 15 km to the north of the Productora deposit. The ENAMI agreement with Hot Chili should result in the commencement of mining in the second half of this year, following the completion of the appropriate permitting.

Mining will be undertaken at a rate of 120,000 tonnes per annum with the Productora JV, which is 80 per cent owned by Hot Chili, being paid US$2 per tonne of ore processed and a 10% royalty for the sale value of the extracted minerals. Hot Chili anticipates that the operation will deliver $1.2-1.5 million per annum into the company’s coffers.

The ENAMI transaction makes sense on a number of levels for Hot Chili. CAPEX requirements for huge porphry’s usually require very deep pockets and ENAMI’s ownership of an existing mining processing facility just 15km away is exquisite because it allows Hot Chili to sidestep the CAPEX requirements at Productora for now whilst still sweeping up a solid annual income.

Productora was always Hot Chili’s main game until it discovered Cortadera to the east and that project is now taking centre stage for the Perth based developer after turning out half a dozen of the best copper-gold drill holes anywhere in the world over the last couple of years.

Initially, the company anticipates that the cash generated from Productora will assist in funding the exploration and evaluation of various high-grade opportunities throughout the region. This strategy proposes the mining and processing of multiple satellite high-grade open pits surrounding a central facility at Cortadera, greatly enhancing the economics of the project and further de-risking Hot Chili’s development strategy.

Drilling is scheduled to recommence on the Cortadera discovery in the coming weeks, with the priority being extensional drilling of the large high-grade core at the Cuerpo 3 prospect. Four-dimensional geological modelling of the discovery is an invaluable exploration tool and has proven highly accurate in predicting the deposit envelope and high-grade core to the system. Importantly, recent modelling shows the discovery to be still open in all directions.

The Cuerpo 3 core now measures an impressive 500 metres long, 200 metres wide and extends from 200 metres below surface to more than 1,000 metres depth - drill intercepts have been averaging between 0.7-0.9% copper and 0.2-0.5 grams per tonne gold.

Drilling is designed to infill on the current pattern and to delineate the system at depth. In addition, exploration will test the sparsely drilled areas between Cuerpo 2 and 3, where only one or two well placed drill holes could make all the difference. It is also perhaps not out of the question that Hot Chili could get Cuerpo 2 and Cuerpo 3 to join up and the combined two prospects would then present as an irresistible early mining opportunity.

The company predicts that Cuerpo 2 and 3 are part of the same system and form a much larger envelope of copper-gold mineralisation. It says that drilling of the core at Cuerpo 2 may significantly expand the target, adding high-grade tonnage to the inventory of the discovery.

The company is planning to table its maiden resource for Cortadera in the next few months and with 700m and 900m long mineralised drill holes, the number is sure to be highly anticipated by the market.

The key for Hot Chili now is for it to scrub up Cortadera to a point where it has a mineable high grade core that can be got at quickly and easily and without ridiculous amounts of CAPEX and if recent drill holes at Cortadera are anything to go by, that looks to be possible.

The question now is that whilst the Cortadera copper-gold porphyry discovery is outstanding, is it hot enough to be one of  ‘Andean’ proportions?