Baker's baristas bring in the crowds

The trickle-down effect of the decline in mining activity has reached the tasty biscuit market. 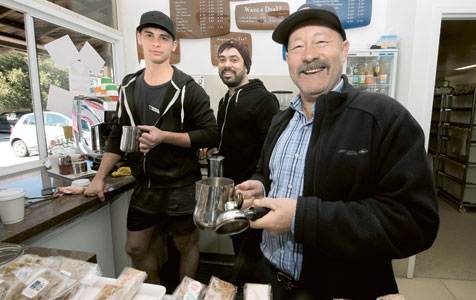 The trickle-down effect of the decline in mining activity has reached the tasty biscuit market.

Local speciality biscuit maker For The Coffee Table has embarked on a diversification strategy, taking a punt on the competitive coffee market for an additional source of revenue.

The business has opened a coffee and biscuit bar on Cambridge Street in Wembley, having experienced a slowing of its traditional business supplying tasty biscuits at conferences.

With a name like For The Coffee Table, owner Graham Baker says expanding to also satisfy customers’ caffeine cravings was the logical next step for the family owned and operated business.

“We had a shop where people could come in and buy biscuits, and we had a lot of people asking for coffee, but we didn’t have the facilities for that,” Mr Baker told Gusto.

That changed once the business moved into the new location on Cambridge Street in January and invested in a new kitchen for the baking of wholesale and retail products.

“We thought we’d take that opportunity to create the coffee and biscuit bar where people can actually sit down and eat our product,” Mr Baker says.

If the market for retail coffee wasn’t already competitive enough in Perth, Mr Baker says there’s extra pressure to make the expansion a success in terms of quality.

“The challenge of course is that because all of our biscuits are the best quality, we wondered what we would do with coffee,” he says.

The decision was made to use coffee beans from Margaret River-founded supplier Yahava Koffee, milk from Bannister Downs, and employ experienced baristas who knew the Perth market.

And then there’s the controversial issue of how much to charge for a simple flat white. For The Coffee Table’s not the cheapest cup in town at $4 for a regular, but Mr Baker says that aligns with the business’ high-quality profile.

“I think people think selling coffee is just a recipe to print money, but it’s not that easy; you’ve got to work at it and we’ve worked really hard to get our reputation out and let people know we’re here,” he says.

Mr Baker and his wife have been at the helm of the biscuit business since 2005 when the founders sold out.

Since then, the original emphasis on baking without additives or artificial preservatives has been retained and the business has grown to become a major wholesaler to all the major hotels in Perth.

With the wholesale arm of the business the main bread-winner, Mr Baker said the drop in economic activity over the past six to nine months has been noticeable, with both walk-in retail customers and major wholesale clients were seeking the cheaper option.

“People have not stopped eating biscuits, but the quantities are not as great, and perhaps in the past where they might have had a Florentine now they’ll have a shortbread or something similar,” Mr Baker says.

“(The drop in business) has not been huge, but the cafe has given us another revenue stream which is complementary. So what’s happening now is that all of our traditional biscuit customers are coming in and now having a coffee as well, and people that are just coming for coffee will have a biscuit.”

Mr Baker says there have been suggestions to expand the product range as consumers become more health conscious and mature in their tastes.

The business has adhered to demand for gluten and dairy-free options, but introducing other baked goods has been ruled out.

“At the end of the day we make great quality biscuits and slices and we focus on that; what we do we do really well. Better to do that than do a number of things and do it mediocre,” Mr Baker says.