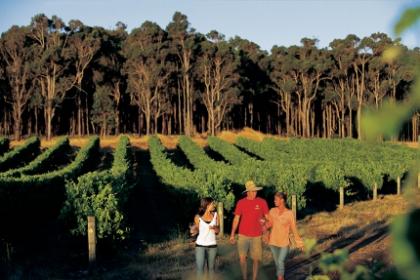 Margaret River has been named Australia's favourite town for the second consecutive year.

The down south getaway was voted Australia’s best town at the Australian Traveller magazine’s reader’s choice awards last night on the back of its restaurants, wineries, galleries and surf.

Augusta-Margaret River Tourism Association chief executive Simon Ambrose said the region was a world class tourism destination, and the entire region from Busselton to Augusta can be proud of the achievement.

“We are delighted that the readers of Australian Traveller cherish Margaret River as much as we do – the region offers such a diversity of experiences, from world class food and wine, adventure activities, to pristine beaches and stunning natural attractions,” Mr Ambrose said.

Sydney was named the nation's favourite city, beating its rival Melbourne by a solitary vote.

Melbourne, winner of Australia's favourite city in the 2011 contest, only picked up one award this year - that of best luxury hotel in Australia, for the Crown.

More than 1000 readers of the magazine completed the survey to nominate their favourite Australian places.

Queensland was the highest-winning state overall, with seven awards.

"Judging by the startling number of Sydney award winners, it's the city's buzzing cosmopolitan delights that are clearly appealing to travellers," she added.