Shipbuilder Austal has won a $US51.7 million ($A71.8 million) contract to provide upgrade services to the company’s biggest customer, the US Navy. 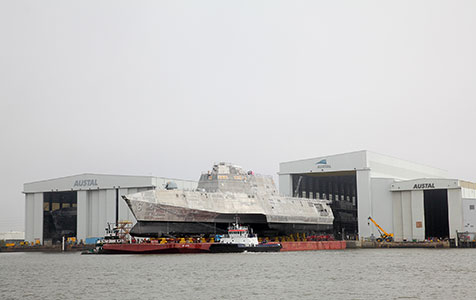 Austal will provide upgrade services to littoral combat ships it has built for the US Navy.

Shipbuilder Austal has won a $US51.7 million ($A71.8 million) contract to provide upgrade services to the company’s biggest customer, the US Navy.

The scope of work under the contract involves design services for upgrades to littoral combat ships Austal has built for the US Navy, and preliminary design for the navy’s future frigate.

In a statement, Austal said the value of the contract is expected to increase to about $US198.4 million over three years if options are exercised.

“Work will be performed at Austal’s state-of-the-art ship manufacturing facility in Mobile, Alabama,” the shipbuilder said.

Austal chief executive Andrew Bellamy said the contract reflected the US Navy’s confidence in the company’s ability to build and support highly advanced ships and to meet today’s changing requirements.

Austal shares lost nearly 40 per cent of their value in December after the company announced a potential 2 per cent shaving of its profit margin in the US due to problems at its American operations.