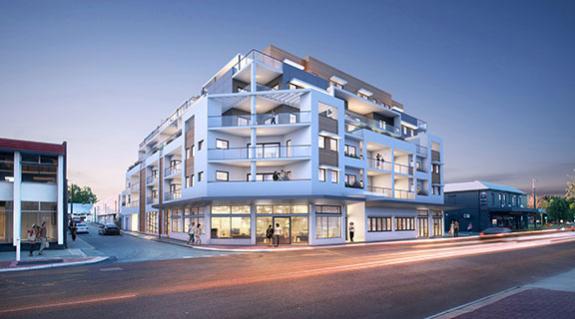 While growth and sales in other forms of real estate remain subdued, research from Consulting Firm Urbis published last week showed 668 apartments sold across Perth in the three months to the end of June — marking a 41 per cent increase on December quarter sales. The research showed that more than 2,456 apartments were sold in the past year. That figure is likely to grow rapidly over the next 12 months as the property market bottoms out and begins to recover.

Mr Enslin said WA property buyers had increasingly turned to higher-density housing options, often in the city centre or inner-city suburbs, because they offered a more vibrant lifestyle close to amenity such as cafes, restaurants and transport links.

While generations of West Australians have dreamed of a house in the suburbs, a December 2014 study carried out by Psaros in conjunction with the Property Council of WA and the Conservation Council of WA, showed 73 per cent of people would consider living in a medium density home like a townhouse or villa in the future, while half said they would consider higher density living, like an apartment or unit.

The city’s population is predicted to double to about 3.5 million by 2050. Housing all those people was going to prove challenging.

“What you shouldn’t do is add another Perth on the edge of the existing Perth,” he said. “What you do is you densify the city.”

Successive State Governments over the past 15 years have also advocated for high-density development around transport links, like train stations.

Mr Enslin said Perth homebuyers are already seeing the advantages of living closer to the city centre — and avoiding the city’s growing congestion problem which is becoming a major factor.

“It’s a fact that Perth residents living and working in or near the city experience considerably lower transportation costs than those living in Perth’s suburban outskirts,” he said.

A 2014 study by the Committee for Perth showed a daily commute to the city from somewhere like Joondalup (a journey of about 25 kilometres) will cost a motorist up to $22,306 a year. That includes everything from fuel and servicing to car registration and insurance — and it is money that could be paying off a mortgage instead. Even driving from suburbs relatively close to the city, say five kilometres away, will cost a commuter more than $9000 a year. Then there’s the time wasted and stress caused queuing in traffic twice a day — not to mention the environmental impact.

“If you’re a cycling enthusiast or you just like a leisurely pedal from time-to-time, you may not need a car at all.”

But the major pull factor seems to be lifestyle. West Aussies are embracing a more vibrant inner city and want to be a part of it. Events like Fringe World and the Beaufort Street Festival, a growing number of hawker’s and street markets, a plethora of new small bars and restaurants and thriving shopping strips like William, Beaufort, Oxford and Cambridge Streets, are changing the way Perth people live.

Significant State Government investments in the inner city — including Elizabeth Quay on the Swan River, the Perth City Link joining the central business district to Northbridge, the new stadium at Burswood, a new museum, the Riverside project and a passenger rail link to Perth Airport — are all coming online in the not too distant future. Those are set to make the inner city an even more exciting and desirable place to live — potentially driving up property prices.

Experts are warning investors and homebuyers not to be lulled into a false sense that they have plenty of time to get into the property market because of the subdued conditions.

While Perth has been stagnant for a couple of years now, Melbourne and Sydney have been running hot. The differential in median house prices between Sydney and Perth is more than $350,000 right now. Historically it has been about $150,000. The eastern Seaboard is a leading indicator for what will happen around the country.

There are also obvious financial advantages to investing in property sooner rather than later. Interest rates are low. It’s a buyer’s market and developers are offering incredible incentives such as very low deposits — some as low as $5000, instead of the normal $50,000. It can’t last. Those who don’t take advantage of the opportunity now may well be kicking themselves a year from now.

On the flipside, there is the risk of rushing in, ill-informed, and making a bad investment decision. Mr Enslin urged those considering buying an off-the-plan apartment to make sure the developer they choose has a proven track record.

“Ensure the developers are able to show you apartments they have previously built, like a display apartment in a completed complex — and not just a mock-up,” he said.

Mr Enslin also urged investors to consider longer term savings, like making sure the apartment has environmentally sustainable design. Does it use renewable energy, like solar hot water and solar electricity? Does it use energy-efficient lighting and appliances, water-efficient fixtures and electric car charging facilities?

“Sustainability influences all aspects of someone’s life,” he said.

“There are financial benefits to be gained not just in the short term with lower power bills, but critically in the longer term with higher re-sale value and futureproofing against rising energy costs.”

He also suggested buyers keep the old real estate adage “location, location, location” in mind when deciding on a purchase. Being close to local amenities and public transport links will lead to both higher re-sale value and higher rental yields.

It’s a timely reminder that not all apartments are created equal and every buyer — be they an owner-occupier or an investor — must carefully do their research before signing any contract.

But, Mr Enslin warned, they should also be quick.

“The market is bottoming out and the only way is up,” he said. “Don’t wait for the market to turn, as it will turn quickly, so make the most of this opportunity now.”