Amid the gloom, gold’s good to go

If ever Western Australia is to have another slogan on vehicle number plates, then the favourite has to be a return to the short-lived ‘Golden State’ catchphrase. 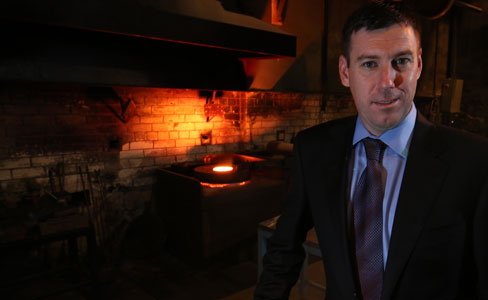 If ever Western Australia is to have another slogan on vehicle number plates, then the favourite has to be a return to the short-lived ‘Golden State’ catchphrase.

One reason for making that suggestion is that anything would be better than the cringeworthy ‘State of Excitement’, or ‘Home of the America’s Cup’, which tarred everyone with a brush made by the late crook, Alan Bond.

Nothing on number plates is best. And while ‘The Wildflower State’ wasn’t offensive, given what’s happening in WA’s vitally important mining industry, it is gold that deserves a re-run (if there is to be one).

Two corporate profit results reports filed earlier today highlighted the importance of gold to WA, in much the same way the mineral lifted the state out of poverty in the 1890s, and again in the 1930s.

Fortunately, economic conditions are not as tough as they were in those periods of depression; though there is no doubt that, with commodity prices in the gutter, an uplift of some sort is needed.

Northern Star Resources and Evolution Mining provided that uplift, as well as pointing to a period when gold will resume its role as a major job creator and contributor to government tax revenue.

Both companies are examples of how reward can follow risk, as well as being examples of profiting from the plunging value of the Australian dollar.

Gold, after all, loves adversity; it traditionally performs well when everything else is not.

Local investor favourite Northern Star has just announced a 198 per cent increase in underlying profit to $108.9 million for the year to June 30, plus a higher dividend.

Evolution, which has operations in WA and other states, lifted its net profit by 112 per cent to $106.1 million, and will pay a modest dividend of 1 cent a share because management wants to retain profits while recent mine acquisitions are absorbed.

Both results reflect the benefits of being in the right industry at the right time, and are in contrast to the poor results reported by the distressed iron ore sector, in which profits have evaporated for all but the biggest and lowest-cost producers.

More of the same, and perhaps even better, can be expected from WA’s gold industry over the next few years.

That’s not because the gold price is expected to do much, but rather that gold wins when the rest of the country goes backwards, as shown in the falling value of the Australian dollar and an expectation that it has a lot further to fall before stabilising.

How low will the dollar go? That is the $64 billion question; but if the world really is regressing to a period of slow growth and Australia’s terms of trade slip back to pre-boom days, then we are looking at an exchange rate in the US60 cents range (and possibly less than that), with US50 cents possible.

The currency performs as an automatic stabiliser as it falls, boosting the value of exports (in Australian dollars), as well as lifting the price of imported goods and services, which also aids local industry.

Those trends are well understood; but what might not be so obvious is that the first effects of the currency shift are being reflected in the profits of goldmining companies, which are immediate beneficiaries of a lower exchange rate.

Whether gold can set a new record high is one interesting possibility. Another is the way in which gold is breathing life back into WA mining – as it has in the past.

How the industry proceeds from this restart is likely to be a repeat of past revivals, with gold leading the way for a few years until the effects of currency and a recovery in commodity demand kick in (with a lot riding on the health of the Chinese economy).

BHP Billiton chief executive Andrew Mackenzie believes China has started to bottom out, with the next six months likely to be more positive than the past six, which actually isn’t saying much as they could hardly be worse.

Investment bank Citibank reckons the downturn in earnings for most resources companies will continue into 2016 – with optimism and earnings growth returning in 2017.

What both of those observations indicate, however, is that the rest of 2015, and next year, will be more of the same tough going; except, fingers crossed, for the industry that has lifted WA in the past and looks like doing it again – gold.