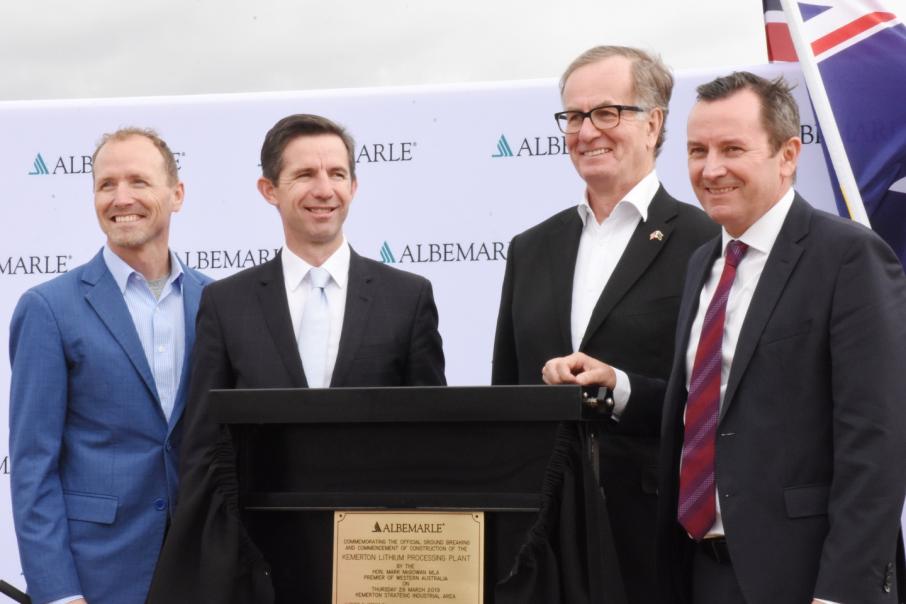 Of 57 major mining projects in the BNiQ database, a large portion are poised to be commissioned, with 24 under way and 16 classified as likely to proceed.

Iron ore, including magnetite, continues to dominate the list of the state’s largest projects, with seven that are either likely or ongoing, worth a combined $12.34 billion.

However, lithium is becoming entrenched at the top end of the list, as miners in WA gradually seek to expand their involvement further up the processing chain. 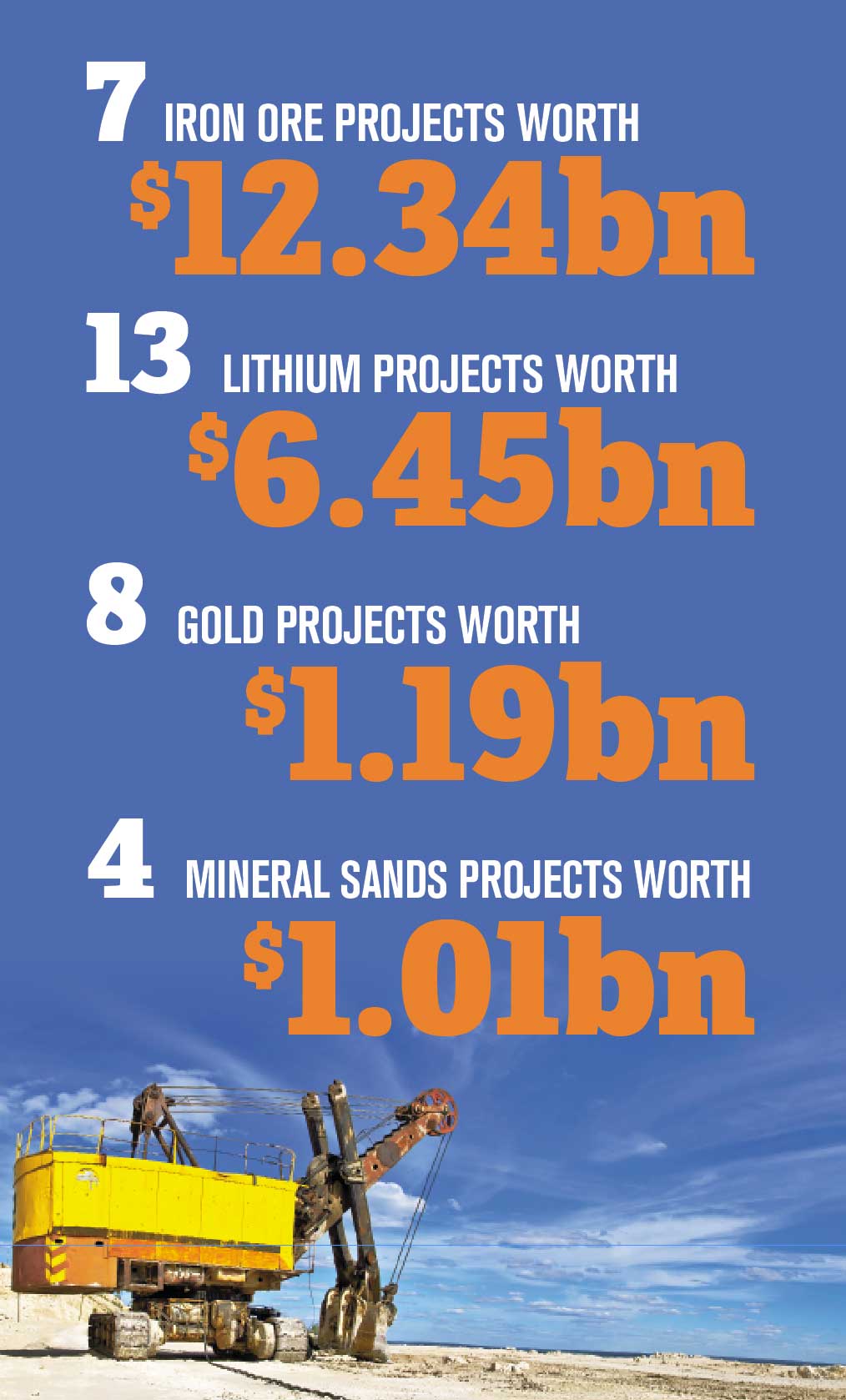 The lithium industry in WA has continued its rapid growth, and there are now 13 projects in the pipeline, with a total value of $6.45 billion.

The planned 100,000 tonnes per annum lithium hydroxide plant at Wodgina, jointly owned by Mineral Resources’ and US-based battery metals giant Albermarle Corporation, tops the lithium list, with an expected cost of about $2.2 billion. 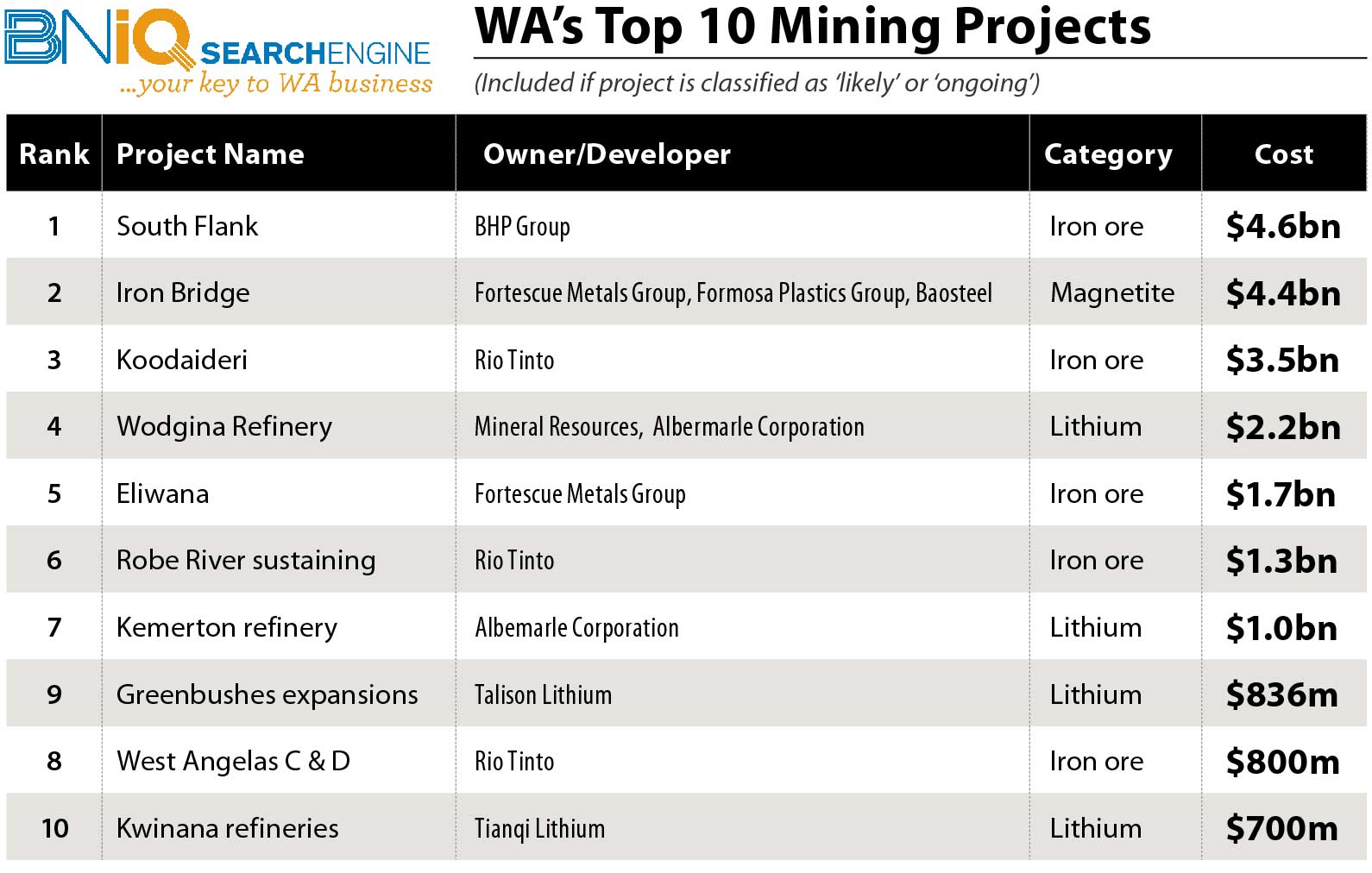 The Wodgina lithium plant encompasses two 50,000tpa lithium hydroxide modules, with the first scheduled to be completed in 2022 and the second at a later date.

Albermarle has been busy in WA over the past few months, with construction recently kicking off at its Kemerton lithium hydroxide plant.

In late March, Premier Mark McGowan joined new US Ambassador to Australia, Arthur Culvahouse, federal Trade Minister Simon Birmingham and Albemarle representatives to turn the first sod on the construction, which the state government said was expected to cost at least $1 billion.

However, Albermarle has not disclosed exact financial details, and many believe the actual cost will be closer to the Wodgina figure.

It is set to create 500 construction jobs and another 100 operational jobs in the South West. The plant has approval to produce up to 100,000tpa of lithium hydroxide.

Kemerton will have an expected initial capacity of 40,000tpa of lithium hydroxide when it is commissioned in 2021, reaching full capacity in 2025.

The refinery is expected to be commissioned in 2021 and produce 45,000tpa of lithium hydroxide, using ore from the planned $450 million Mt Holland mine.

Kidman has a 50 per cent interest in the project, with the other half owned by Sociedad Quimica y Minera de Chile S.A., one of the world’s largest producers and marketers of lithium product.

The refinery will be almost a stone’s throw away from Tianqi Lithium’s Kwinana lithium hydroxide refinery. Tianqi commissioned its $400 million stage one development in January, and stage two is set to be completed by the end of the year, at a cost of $300 million.

While there has been a surge of activity around lithium hydroxide projects, lithium concentrate developments are also attracting substantial investment.

Tianqi’s 51 per cent-owned subsidiary, Talison, (Albermarle 49 per cent) resolved a crucial legal battle in March with Global Advanced Metals, after the Massachusetts-owned company said a proposed expansion to Talison’s Greenbushes operation could potentially sterilise and waste tantalum resources it received from Greenbushes.

The resolution means Talison’s $516 million stage two expansion of Greenbushes will go ahead, with expected completion to bring output to 1.95 milliion tonnes of lithium concentrate per annum.

Earlier this month, it also received Environmental Protection Authority recommendation for its stages three and four expansions to proceed.

The $320 million stage one expansion is due to be completed in the second quarter of 2019, as planned.

In November, Pilbara Minerals’ $231 million stage two Pilgangoora expansion was approved, with commissioning of the stage targeted for the March quarter of 2020. A $225 million stage three expansion is also planned.

In March, Pilbara said it was considering selling between 20 per cent and 49 per cent of the $646 million Pilgangoora concentrate project, as it declared commercial production from the processing plant.

While many projects are being completed on budget, each of the state’s single largest projects in the pipeline for gold, nickel, mineral sands and potash all experienced significant capital cost increases over the past year.

Gold Road Resources and Gold Field’s 50-50 Gruyere gold project, which is set to be commissioned this quarter, had its capital cost revised to $621 million in July.

The company said the upgrade in costs included $30 million due to changes in the scope of works, added costs associated with extreme weather conditions, design changes and increases in the schedule of rates.

Other cost pressures included increased charges for certain equipment, along with employment changes due to a tighter labour market and increases in camp and certain logistical costs.

Gold Road indicated about three months prior to the cost revision the project would come in at the upper end of the capital cost estimate of between $506 million and $585 million, after initially estimating a $532 million expenditure.

Gruyere dwarfs the second largest gold project in the state, Capricorn Metals’ $133 million Karlawinda project, which is located south-east of the town of Newman, and is projected to be commissioned in the third quarter of 2019.

The capex within the DFS increased between $99 million and $109 million from the pre-feasibility study range, mainly due to the installation of a shaft haulage system for $68 million.

It said the $115 million capital cost blowout was due to changes in the scope of work and the infrastructure ownership model, and since this announcement its shares have nearly halved to 56 cents per share, as of May 6.

The Thunderbird project is anticipated to start production in 2020 with a 42-year mine life.

Agrimin’s Lake Mackay sulphate of potash project, had it is capital cost increased from around $371 million to $587 million following a pre-feasibility study that detailed scope to increase annual production from 370,000tpa to 426,000tpa.

First commercial production is still a relatively distant target, estimated for the fourth quarter of 2022.

It has been well documented that WA’s only major magnetite operations, CITIC Pacific Mining’s Sino Iron, and Ansteel and Gindalbie Metals’ Karara, have both suffered multi-billion dollar losses.

However, this has not deterred Fortescue Metals Group in its hunt for a higher grade of iron ore, as it gave the green light to its 69 per cent-owned $4.4 billion Iron Bridge project last month, $700 million of which was put towards a pilot plant to ensure it does not join WA’s magnetite graveyard.

FMG’s main competitors, BHP Group and Rio Tinto, have also been making moves that have kept iron ore at the top of WA’s projects list, buoyed by momentum from strong iron ore prices.

Early construction at Rio’s Robe River and West Angelas C & D projects, worth a combined $2.14 billion, started this year, with first ore from both projects slated for 2021.

After approving its $3.5 billion Koodaideri project in November, Rio purchased a fleet of 20 automated trucks from Caterpillar for the East Pilbara mine earlier this month.

BHP has also ramped up the award of contracts on its $4.5 billion South Flank project, the most expensive mining project in the state.

The beneficiaries include a string of WA-based companies, such as Decmil, Clough, Monadelphous and NRW Holdings, as part of its commitment to provide at least 75 per cent of the work to local businesses.

South Flank is the only substantial iron ore project BHP has in development in WA, and is still on track to be completed by May 2021.

It is set to produce 80 million tonnes per annum.

Mineral Resources may have diverted some of its attention to lithium over the past few years, but it has made several moves in iron ore, including the acquisition of the Koolyanobbing mine in the Yilgarn and BCI Minerals’ Kumina deposit in the Pilbara last year.

It has maintained a focus to commission its $300 million Marillana iron ore project, a 50-50 joint venture with Hong Kong-based Brockman mining, in the fourth quarter of 2020.

The iron ore market could become more crowded and less centralised in the next few years, as several juniors assess restarting projects in WA.